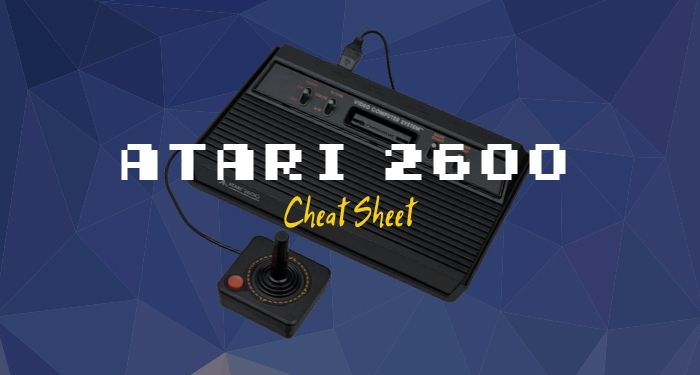 Does the name ATARI stir up any nostalgia? If so, you’re not alone. The Atari 2600 was the first mainstream video game system, and it unleashed the imagination of millions of 70s kids.

Whether or not you’ve played the Atari 2600, you’ve at least heard of the groundbreaking console. And that’s because it changed everything.

With the Atari 2600, you weren’t confined to one or two pre-installed titles. Instead, separate cartridges stored each game’s information, and you could play as many as you liked on the same console. It was a revolutionary concept that untethered – and unleashed – the digital gaming era as we know it today.

Here’s a quick overview of the Atari 2600 console:

The Atari 2600 (sometimes referred to as the Atari VCS), features 1970s vibes through and through. From its simple black design and angular form factor to the switches that adorn its front, the console is a remnant from a bygone era.

As for the controllers? At launch, the system came with two distinct variations. First was the innovative joystick controller, which features a single rotational control and one button. And second was the rotary paddle controller, which functioned like a dial for easy turns and maneuvering.

The Atari 2600 is built upon a 1.19 MHz processor from MOS Technology. Powerful enough for the time, but nothing special. What sets the Atari 2600 apart is its custom-built Television Interface Adapter, which renders graphics and sound effects using a fraction of the RAM that its predecessors required.

And speaking of RAM, the 2600 boasts 128 bytes of random access memory, complements of the MOS RIOT chip. Not a whole lot, even back then. Fortunately, the console could also draw power from its custom ROM cartridges. How much storage did these cartridges have? Let’s just say they maxed out at 4kB of data a pop, which was quite insane for the time.

Rounding out the hardware is the output. The 2600’s stunning bitmap sprites came in glorious black & white or color output via an RCA connector.

The Atari 2600 introduced the world to countless new titles, including Pong, Asteroids, and Dig Dug. Seemingly overnight, these iconic games catapulted to the height of America’s pop culture lexicon, all thanks to Atari.

In reality, it took a few years for the Atari 2600 to become such a runaway success. It wasn’t until Space Invaders – the action-packed sci-fi shooter – hit the market in 1978 that the console started building some serious traction. And when Pac-Man hit in in the early 80s? Forget about it!

But those aren’t the only games responsible for the Atari’s popularity. Let’s take a look at the top 10 best selling Atari 2600 games (rounded to the nearest half million):

In total, the Atari 2600 sold roughly 30 million units! Unbelievable for a game system. But that’s a drop in the bucket compared to the console’s impact.

The Atari 2600 changed the entire industry for the better. It moved the world of gaming (and technology in general) forward, and paved the way for a burgeoning artform: game design.

Unfortunately, what goes up… must come down. After a flurry of rushed and poorly designed games hit the market in the early 80s, fans stopped buying new Atari titles. This event is known as the Video Game Crash of 1983. It was a dark time, and Atari suffered a sharp decline in popularity that it would never quite recover from.

But there was a faint glimmer of hope upon the horizon. A small Japanese company called Nintendo was working on something big.