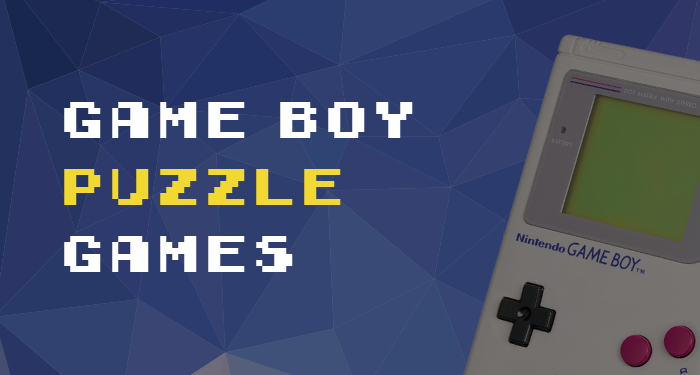 We can’t get over the best Game Boy puzzle games. The little handheld device is home to a number of fantastic challenges and brain-teasers, including some of gaming’s most iconic titles. Tetris, anyone?

After careful consideration, we’ve selected 5 of the best Game Boy puzzle games that are sure to blow your mind (in a good way, of course). Do keep in mind that we’ve specifically chosen titles that are underrated and/or lesser-known. But make no mistake ⁠— they are all top-tier variants with innovative mechanics and impressive gameplay.

Without further ado, let’s get started.

First up is Catrap (Pitman in Japan). Catrap takes its name from the two anthropomorphic cats that make up its titular characters.

But don’t be fooled by the cute kitties. Catrap boasts a hundred levels of mind-bending obstacles that you can spend hours getting lost in. Not to mention, the levels get trickier each time you move ahead.

An example? One of the later levels requires our kitty friends to get past boulders, a plethora of ladders, and several floating ghosts ⁠— all in the same stage. That alone should make you want to get your hands on this fantastic Game Boy puzzle game.

There’s just no escaping Pokémon, not when it comes to retro Nintendo titles.

Pokémon Puzzle Challenge features first and second-gen Pokémon characters, including fan-favorites like Pikachu and Chikorita. Your task as the player is to advance through the campaign by matching blocks and outlasting your opponents. Pretty simple, right?

At its core, the game is easy to get the hang of. However, with three primary modes of play, it goes on to become one of the best and most challenging Game Boy puzzle games on the market.

Kwirk and his girlfriend, Tammy, discover a secret underground labyrinth while adventuring around their city. Long story short, Tammy mysteriously disappears shortly after. From then on, it’s up to Kwirk to get the girl back.

Kwirk plays out like a classic puzzle game with three game modes and three skill levels. Your objective is to clear each level until you’ve finally saved Tammy.

Despite being a fairly straightforward puzzle game, it’s not boring at all, and it’s received great reviews over time. All in all, you should definitely give Kwirk a try.

If you love the simple things in life, then Denki Blocks! will definitely appeal to you.

Denki Blocks! came out in 2001 and was developed by (surprise) Denki. Your goal as the player is to join matching colored blocks together while moving the blocks around a grid. Think Soda Crush, but with a 2001 vibe.

One of the best things we like about this game is its a versus mode for multiple players. So grab a friend, and check it out!

Nintendo sure loves Mario, and so do we ⁠— which is why the last entry on our list is Mario’s Picross.

If you happen to be a fan of nonograms, then you will absolutely love this game. Each nonogram is presented before the player in a square grid of either 5×5, 10×10 or 15×15. Your job is to chisel away at the grid to reveal the picture underneath. You’re given thirty minutes to solve each puzzle, and there are hints available to help you along your way.

Think you can handle the challenge? Check out Mario’s Picross for some retro gaming excitement!

Game Boy Puzzle Games are not only fun, but they’re also oddly therapeutic. Not to mention, the five games we’ve lined up for you are among the best in this category ⁠— without a doubt. Hopefully, you’ll love these games just as much as we do!