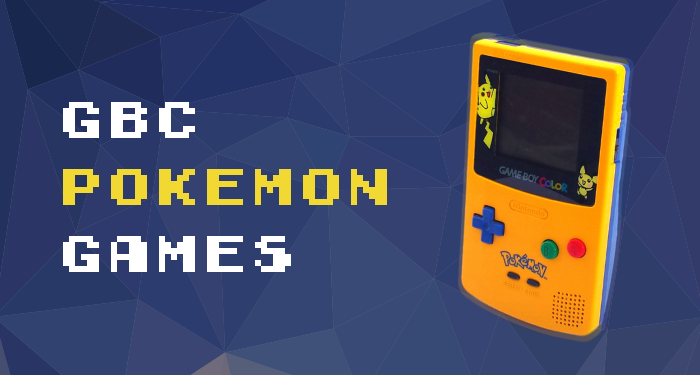 Remember the good ‘ol days when there were only 150 Pokémon? Or when Gold & Silver launched and introduced a whole new generation of pocket monsters and enhanced mechanics? Ah, nostalgia.

The Pokémon games for GameBoy Color launched the entire franchise, and were many kid’s first introduction to video games.

Naturally, the GBC Pokémon games hold a special place in many of our hearts. But that doesn’t mean they were all created equal. Despite rave ratings across the board, fans and critics do have their favorites.

This article takes you through the 7 Pokémon games made for the GameBoy Color (we’re only counting English variants at this time), ranked from worst to best. Our scores are taken from game review aggregates and are a reflection of the video game community’s consensus at the time of release.

Ready to see ‘em all? Let’s get started.

Let’s dive right into the list with a look at the lowest-rated Pokémon game for GBC.

Released in the summer of 2001, Pokémon Crystal built upon its immediate predecessors – Pokémon Silver and Gold – with updated graphics and gameplay mechanics.

Crystal follows the journey of a young trainer on the eve of his grand adventure across the Johto region. With a dream to become a Pokémon master, it’ll take everything you’ve got to rise through the ranks, collect all eight gym badges, and prove yourself a worthy trainer. Think you can handle the challenge?

Pokémon Crystal is the first game in the franchise to let you choose your sex, opening the door for a more inclusive audience. It also introduces a few exclusive mini-quests and Pokémon, including the legendary Suicune.

The game achieved an 80 out of 100 (still respectable) on Game Rankings, one of the top retro metrics aggregator, with fans and critics disparaging its similarities to Gold and Silver. But don’t let that fool you – Pokémon Crystal is a Game Boy Color Pokémon game you don’t want to miss!

The first Poké spin-off on our list is the Pokémon Trading Card Game video game. An adaptation of the actual TCG, this game is a digital simulation of the tabletop version from Wizards of the Coast. As such, it features 226 different cards, including replicas from IRL!

The premise of PTCG is simple. Assume control of Blue, a young lad on a journey to become a Pokémon Master, and use your 60-card deck of pocket monsters to take down a series of Club Masters – eight to be precise. Instead of leveling your Pokémon or gaining money for taking down opponents, you win booster packs that you can use to enhance your deck for more difficult battles to come.

Like the main games in the series, the Pokémon Trading Card Game allows players to link up via cable to battle each other and/or trade cards – including limited edition copies not otherwise available.

Pokémon Trading Card Game isn’t the highest rated on our list, but it’s still a classic and one of the best GBC Pokémon games to check out. And it was successful enough to warrant a sequel, albeit one only available in Japan. Pokémon Card GB2: Here Comes Great Team Rocket! hit the shelves on March 28, 2001, in Tokyo.

True to its time, the team at Nintendo decided to release a special arcade-themed version of Pokémon back in the late 90s. Introducing Pokémon Pinball.

Pokémon Pinball is another spin-off with a simple premise. Launch open the game, sit down at the pinball table (red or blue), and score as many points as possible by launching your ball around a Pokémon-themed board.

But wait – there’s more! Pokémon Pinball has a few tricks up its sleeves thanks to its Catch and Evolution Modes. Catch Mode allows you to capture new Pokémon for your collection by successfully hitting pop bumpers – very iconic and a nice reprieve from the standard pinball play. And Evolution Mode gives you the chance to evolve a captured Pokémon by hitting special targets on the field.

Pokémon Pinball received favorable reviews, though its physics mechanics are known for being a bit unrealistic. Still, it’s a fun game to try out, and it paved the way for the exciting sequel just a few years later: Pokémon Pinball: Ruby & Sapphire for the GBA.

Okay, you got me. it may not be the best, according to the critics. But it’s the one I started with, so it has a special place in my heart.

Pokémon Yellow expands upon the Red and Blue versions with an updated story that follows the sequence of events from the anime. You begin the game with a Pikachu (as opposed to one of the three starters) and embark on a quest to catch ‘em all!

Along the journey, you’ll encounter your favorite characters from the show, including Officer Jenny and Nurse Joy, Jesse and James, and the sinister Giovanni. Battle through the gyms, collect all eight badges, then try your luck at the Elite 4 – a Pokémon trainer’s ultimate test of strength. Have you got what it takes to defeat Gary, your ultimate rival, and become the champion?

In addition to the above changes, Pokémon Yellow also adds some new sprites and graphics, as well as pops of color that take advantage of the updated GBC console. Overall, it’s an exciting game with lots of charm and character.

Welcome to the wonderful region of Kanto, home to the original 150 Pokémon! Choose your favorite starter – Squirtle, Charmander, or Bulbasaur – and hit the road. You’ve got a mission to become the greatest Pokémon master of all time. And your journey begins now.

Pokémon Red and Blue are the games that started it all – outside of Japan, anyways. Frequently cited as two of the best games of all time, these two titles singlehandedly spawned a multi-billion dollar franchise.

Forget what you know about the games for just a minute and think about it: you used magical Pokéballs to catch awesome pocket monsters with all kinds of cool and powerful abilities. Utilizing the turn-based battle system common among JRPGs of the era, you then got to battle these monsters against NPCs, and even your friends! And, there was an incredible story of courage and bravery to go along with it.

What’s not to love?

Like all the mainline Pokémon games, there were a few differences between the versions. The most notable? A select few version-specific Pokémon, like Vulpix, Meowth, and Sandshrew. But nothing game-changing or groundbreaking.

Pokémon Red and Blue are burned into the history of video games and baked right into 90s culture. But as revolutionary as they were, they aren’t the highest-rated Pokémon games out there.

Following the lead of the original Red & Blue, Pokémon Gold & Silver serve as an introduction to a new region – known as Johto – as well as 100 new Pokémon. The gameplay between Gold & Silver is nearly identical, but you’ll need both versions to complete your Pokédex.

The premise of the games? Assume control of a player avatar, then travel across the Johto region, searching far and wide. Defeat the 8 gym leaders and catch as many Pokémon as possible to become the premier master of the land. Once you’ve beaten all the challenges, you can even travel back to the original Kanto area from Red & Blue!

Gold & Silver boast nearly 20 hours of immersive content and are routinely ranked among the best titles in the entire series. Moreover, they feature the highest ratings of all the main GBC Pokémon games and are tied with earlier versions in terms of sales.

Gold & Silver not only matched the extraordinarily high bar set by the original titles, but raised it even further.

Developed by Intelligent Systems and released on the Game Boy Color back in 2000, Pokémon Puzzle Challenge packs all your favorite pocket monsters from the second generation into an exceptional puzzle title.

The premise is simple. It starts out with you choosing your Pokémon and your opponent choosing theirs (this is more thematic than anything, and the Poké pal you choose doesn’t really affect gameplay). Once the game begins, colored blocks fall from the top of the screen, Tetris-style, and it’s your job to match them up (thus eliminating them) before your screen fills up! Throw in Pokémon-themed twists like a campaign that takes you across the Johto region, and you’ve got one heckuva challenge!

Like the other GBC Pokémon games released during this generation, Pokémon Puzzle Challenge was very favorably received by critics, achieving a Game Rankings score of 90 out of 100!

So what are you waiting for? Team up with old-school pals like Chikorita, Cyndaquil, and Totodile, and experience Pokémon Puzzle Challenge for yourself.