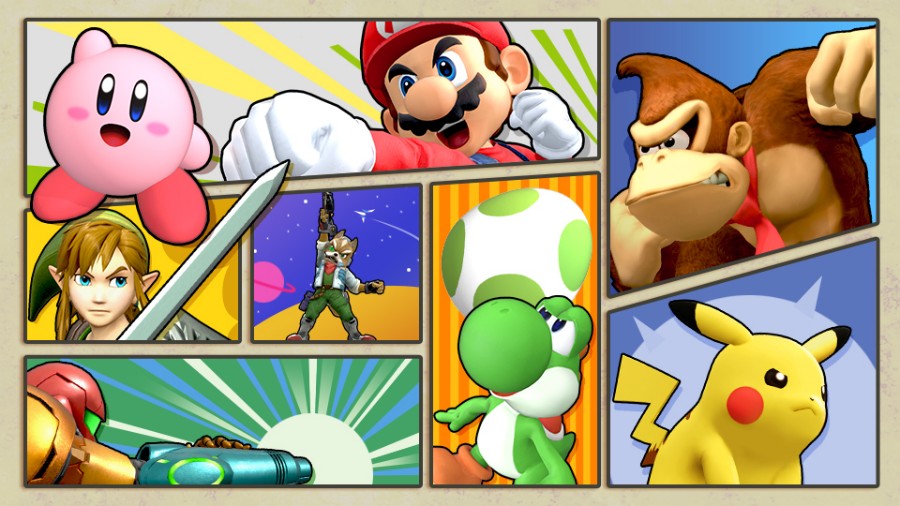 Fighting games were few and far between on the Nintendo 64. That’s because most popular mid-90’s fighting titles released on arcade platforms first, Sega and PlayStation consoles second, and Nintendo last. With Nintendo’s reputation as a kiddy console maker, there just wasn’t much developer interest in porting everything over.

However — there are still several titles worth picking up. Heck, some of the best N64 fighting games wipe the floor with their PlayStation and Sega counterparts from the same period.

N64’s fighting games let you participate in boxing matches, fly around in mech suits, and even perform the very same finishing moves that established the NSRB and game ratings. Plus, it was home to the first game in an iconic series, one that combines all of Nintendo’s best characters in an all-out chaotic match-up.

Without further ado, let’s jump into the list of best Nintendo 64 fighting games with a look at a rather unexpected entry.

Generally, movie and television license tie-ins don’t scream quality when translated to the world of video games. But Xena: Warrior Princess: The Talisman of Fate was actually pretty good.

The single-player story follows the mighty Xena in a tournament to decide who acquires the eponymous talisman. The game features weapon-based combat with combo mechanics and character-specific special moves that you’d expect from a 90s fighting game. The main difference here is that matches were much looser, taking place in 3D space rather than on a 2D plane. In other words, the bouts were more freeform and much less likely to end up with you pinned against a wall.

Graphically, the game is quite detailed. That’s especially true considering the technology on hand. What’s more, all the characters came with their TV show outfits, which was a nice touch. Unfortunately, the developers at Saffire weren’t able to secure the original voice actors.

ClayFighter: Sculptor’s Cut is an upgraded version of ClayFighters 63 ⅓ (it’s also one of the rarest video games on the N64).

While this all-out brawling title wasn’t a technical masterpiece, it got by on its wackiness and goofy factors. Sculptor’s Cut was a more kid-friendly, tongue-in-cheek alternative to the brutal and graphic depictions in titles like Mortal Kombat and Killer Instinct. Although it had its own unique charm, you could also find familiar mechanics like super combos and combo building, which the developers borrowed from fellow genre brethren Street Fighter.

Sculptor’s Cut had more time in development than its predecessor, paving the way for better UI, combat mechanics, and additional characters. Its scarcity came from the fact you could only rent it from Blockbuster Video stores in North America, with one extra copy available as a contest prize.

8. Tom and Jerry in Fists of Furry

Everyone loves Tom and Jerry. That said, it’s known more as a successful TV show series than an impressive video game franchise. That’s why it was so surprising to see Tom and Jerry in Fists of Furry debut to such praise on the N64 game console. Compared to previous Tom and Jerry titles, Fists of Furry has a more natural feel to its premise, making it more linear and less inventive but more accessible at the same time.

Take control of your favorite character — Tom or Jerry — and duke it out in various arenas, using an assortment of comedic weaponry to gain the upper hand. All the while, you’ll have to navigate the various interactive and destructible elements of the environment. Grab the best weapons to use against your opponent and collect the different power-ups to tilt the balance in your favor. There can only be one winner, so play smart.

Tom and Jerry in Fists of Furry isn’t the most technical affair, but there’s still lots of feline fun to enjoy.

While its hand-drawn visuals lend it an instantly identifiable aesthetic, Rakugakids has just as much substance as it does style. While it does tone down the complexity and difficulty of its controls, it doesn’t sacrifice overall quality.

Both developed and published by Konami, Rakugakids may look like it’s designed just for kids, but deeper mechanics lurk underneath the surface. Characters have combos, special moves, and a super meter that you can use in three different ways, and they each provide a strategic advantage depending on the situation.

The game’s characters are all quirky and lovable, with a cat that fights with breakdancing moves and a basketball, a bear who can turn into a tank, and a character who is (seemingly) made of jelly but can turn into a fork. The devs also throw in a simplified version of air combat to add some dynamism to the proceedings.

Overshadowed somewhat by its arcade port, Killer Instinct Gold was still a respectable fighting game by then-Nintendo hitmakers Rare. But it was lacking in a few departments (particular graphically) compared to the cabinet variant.

To understand what happened, let’s go back to the original Killer Instinct. This unexpected hit was initially developed as a response to Mortal Kombat, but it eventually became a major success in arcades. The original title then made its way to the Super Nintendo, albeit with several performance-related downgrades. Despite this, it sold well, and there was a lot of hope for the next title in the series. But when Killer Instinct Gold was released, it suffered the same fate. Even with the N64’s new and advanced hardware, the home console just couldn’t compete with the arcade’s superior components.

That said, KIG still featured the same fast-paced combat, stylish combos, and fatality-rivaling finishing moves. A stellar soundtrack also made it to the console version, providing delightful background music as you clobbered your opponents time and again.

From the publishers of famed fighting series Mortal Kombat comes Ready 2 Rumble Boxing, a more lighthearted approach to trading fisticuffs in the ring. The game features a colorful cast, each with their own special moves called “Rumble Flurries” as well as an ultimate-inspired “Rumble Meter.” Select from the roster, then prepare to square up against friends in an all-out battle.

The game shows great attention to detail by displaying the injuries sustained by fighters during the bout. Depending on how much damage you’ve suffered during the match, you’re liable to see everything from black eyes to swelling body parts.

Praised for its graphics and fun gameplay, R2R Boxing was a haymaker of a fighting game. It also featured the legendary announcer Michael Buffer, known for the iconic “ready to rumble” phrase.

Given its Japanese-only release, it wouldn’t be surprising if you haven’t heard of the Gundam-like arena fighting series called Custom Robo. In short, it pits up to four players in their customizable robo suits against each other. You jump into an arena and fight it out until you’re either knocked down or the last man standing.

Custom Robo V2 stands out vividly, its Eastern influences permeating the design and overflowing from its pours. Everything from its UI construction to its soundtrack bathes in the aroma of Japanese video game design philosophy.

What differentiates Custom Robo V2 from all other entries on this list is that it employs RPG mechanics that allow you to outfit your chosen character with stats and weapons. So not only do you get the high-octane action of flying around a 3D battlefield in a mech suit, but you get to fully kit out your character in a personalized manner, making the encounters much more intimate and unique. Without a doubt, one of the more unique titles among the best N64 fighting games.

Since it was delayed and missed the prime retail holiday window, Fighters Destiny wasn’t as popular as it should have been. But it was still one of the best N64 fighting games.

The most remarkable element in Fighters Destiny was its diverse cast of unique characters, each with a unique fighting style. The characters weren’t easy to learn and master, either. Although there were only nine playable brawlers to choose from, it took a lot of dedication to become good at one.

Like a specific Nintendo all-star fighting game that we might get to later, Fighters Destiny introduced a few novel concepts. A notable standout was the style point system, which added a new layer of interesting mechanics to the age-old health depletion gauge. It also had various options within its single-player mode, adding to its longevity as a solo experience rather than just relying on its multiplayer aspects.

Not content with porting all three previous games onto the console with Mortal Kombat Trilogy, Eurocom also decided to give the N64 Mortal Kombat 4. This latest iteration upped the ante once again and became one of the best N64 fighting games on the entire platform.

To start, this game wasn’t for the faint of heart. Mortal Kombat 4 was even more violent than the three spine-ripping, cranium-decapitating games that came before it. It was also much more intensive, as you gained the ability to wield weapons drawn by entering specific button combinations. This was in addition to other contextual weapons that now littered the battlefield, including skulls and small rocks.

Mortal Kombat 4 did get some slight criticism for the lack of content on the moveset side (there were more options available for players in MKT). But this was a natural side effect to using more of the memory for updated 3D visuals.

As one of the most popular fighting games ever made (one that’s thriving to this day), Super Smash Bros. is the obvious winner on this list of best N64 fighting games. The original N64 Smash Bros. gave us an all-star fighting game that more than likely took Nintendo by surprise with its immensely positive reception.

Featuring Mario, Donkey Kong, Link, and a handful of other iconic Nintendo characters (including the majestic Captain Falcon), Super Smash Bros. is simultaneously the antithesis and complement to other fighting games of the time.

With unconventional stages and a host of items, the original Super Smash Bros. managed to be a fantastic party game to play in a silly fashion with your friends. But it was equally satisfying as a competitive title played on a professional level. All told, that was enough to catapult Smash to superstar status. And, rumor has it that it may be coming to Nintendo Switch sometime soon!