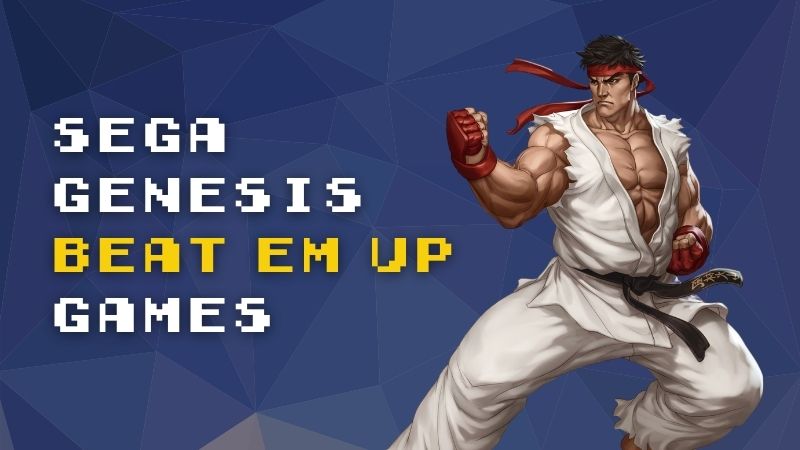 If nonstop action is your jam, the best Sega Genesis beat ’em ups are a collection of retro titles you don’t want to miss.

What is a beat ’em up, you ask? It’s sorta like a hybrid between an action and fighting game — one that pits you against wave after wave of enemy combatants, often within a platform environment. You either win… or you die.

Although beat ’em ups first entered the scene in 1984, it wasn’t until the Sega Genesis and its 16-bit technology hit the market that the genre entered its golden age. To be sure, the Genesis featured an array of excellent beat ’em ups from its release in 1989 to its sunsetting in the late 90s.

In this article, let’s check out the top titles from that era, working through them like goons in your favorite beat ’em up.

Starting at #10 and working our way down, it’s time to scope out the top Sega Genesis beat ’em up games to grace the console.

The premise? It all begins when the Black Warrior Gang kidnaps Miss Marian and holds her hostage as part of their diabolical plan. Assume control of Hammer (Marian’s boyfriend) and set out to rescue the damsel in distress.

Use Hammer’s martial arts skills to navigate the Black Warrior’s turf, jumping, punching, and kicking your way through an onslaught of enemies. Be sure to take advantage of the miscellaneous weaponry found throughout the game’s various backdrops (this includes bats, whips, and throwing knives), using everything at your disposal to emerge victoriously. After all, everything’s fair in love and war.

Originally an arcade game, Double Dragon was ported to countless consoles, including the Sega Genesis. While each version varied in gameplay and appearance, the Genesis version remained faithful to the original in nearly every aspect.

Why is Golden Axe so high on our list of best Sega Genesis beat ’em ups? As instrumental as this title was in cementing the genre in popular culture, it was more of a hack ‘n slash game than a tried ‘n true beat ’em up. Still, we’d be remiss to exclude such an excellent game, especially one crafted by Sega themselves.

The premise, you ask? It’s the typical fantasy story, where an evil usurper captures the royal family as well as a rare artifact known as the Golden Axe. Then, just when everything’s looking grim, a band of heroes steps in to save the day and wrestle back control.

Play as an Amazon, barbarian, or dwarf as you travel level by level, battling waves of enemies until your reach the would-be ruler’s castle gates. When the time comes, do you have what it takes to hack ‘n slash to victory?

Golden Axe is a classic beat ’em up ported to countless consoles over the years. But the Genesis version remains a fan favorite thanks to an additional level, mode, and secret storyline.

Comic books are a staple of pop culture in the 2020s, largely thanks to the Marvel Cinematic Universe. However, comic books have always been a popular part of nerd culture — even back in the 1990s. Sega’s attempt at reaching this devoted audience? Comix Zone.

In this innovative title, players assume control of Sketch Turner, a freelance artist working on a new comic book series called Comix Zone. But everything goes south when he gets transported into the very world he created! Now, all of his creations are out to kill him, and he must fight his way through the platformer world in an attempt to free himself.

Comix Zone is an ambitious and creative title built around the typical comic book layout, where different scenes play out across different panels. It also features a standard comic-y color palette from the era and text bubbles for dialogue.

Critics praised the game for its stunning visuals and intelligent use of comic book concepts, but knocked it down a few pegs for repetitive gameplay. Still, if the beat ’em up formula and its combination of punches, kicks, and jump attacks is your jam, this is one of the best Sega Genesis brawlers to check out.

There wasn’t a more popular children’s cartoons in the 90s than the pizza-eating, sewer-surfing Teenage Mutant Ninja Turtles. The reptilian quartet had a few games on different systems, but TMNT: The Hyperstone Heist (also known as TMNT: Return of the Shredder) was the only title exclusive to the Sega Genesis.

Similar (and a sequel of sorts) to the hit game TMNT: Turtles in Time, TMNT: THH is another beat ’em up where you can play as one of the four artistic-inspired turtles in both single-player and co-op. In this adventure, Leo, Mikey, Raph, and Donny have to stop Shredder from taking over the world using the Hyperstone, a treasure taken from Dimension X.

The game differs from Turtles in Time by having much longer levels. It also featured an AI that was quite challenging, despite its heavily child-centric fanbase.

The game shines with its vivid color palette, and nails the Saturday Morning Cartoon aesthetic quite well. The gameplay is fast and frenetic, and each of the turtles boasts a moveset in line with their respective weaponry. Moreover, various powerups in the levels provide a (much appreciated) temporary edge.

The Hyperstone Heist is a fun beat ’em up that, while made for a younger demographic, has good aspects in all departments.

“Welcome to your doom!”

Look, I’ll just come out and say it — Altered Beast is one of the most iconic beat ’em ups in video game history.

Although panned by critics, it became a staple of the retro gaming scene in the late 80s and early 90s. Why was it so popular? It’s probably due to the game’s addictive beat ’em up platformer action, as well as its incredible voice track. Whatever the reason, Altered Beast became so popular that it was offered as a pack-in with new Genesis consoles (before Sonic the Hedgehog, of course).

What’s the concept? The game is set in Ancient Greece and follows the story of an “altered beast,” resurrected by Zeus for an ambitious quest into the underworld. Your task? To assume control of the beast, travel down to the depths of hell, and rescue the goddess Athena from her captor, Neff.

Punch, kick, jump, and strategize your way across five stages, collecting powerups and spirit balls along the way. Manage to find enough upgrades, and you’ll transform into a human/beast capable of trampling every foe in his path.

Altered Beast is one of the best Sega Genesis beat ’em ups ever made and well-deserved of its place on this list.

If you’re a glutton for punishment, Battletoads is one of the best Sega Genesis beat ’em ups for you. Not only is it known for challenging gameplay, but it also features nonstop fighting action that’s sure to keep you on your toes.

The game’s premise? The Dark Queen has kidnapped the revered Princess Angelica! It’s up to the Battletoads — Pimple, Rash, and Zitz — to save the day and rescue the damsel in distress.

Journey across various planets seeking her out. Use your vast array of frog-fu maneuvers — including the likes of Jawbuster, Kiss-My-Fist, and Battletoad Butt — to fight your way through enemy squadrons, ridding the world of their malicious presence. Be sure to scope out the platformer environment as you go, using different props to whack and throw at any would-be assailants. Think you can find the princess in time?

The silly game garnered mostly positive reviews and spawned a number of sequels and remakes. While the Sega Genesis port wasn’t the greatest rendition, it’s still an exciting romp that you don’t want to miss.

4. Captain America and The Avengers

Captain America and The Avengers follows the story arc of Red Skull, who you’ll recognize from the first Captain America movie back in 2011. Only this time, he’s put together a ragtag team of Marvel’s most insidious villains, including foes like Mandarin, Whirlwind, even Ultron himself!

Play as Captain America, Hawkeye, Iron Man, or Vision as you fight through waves of supervillains and their henchmen. Think strategically as you play through each platformer level, using each character’s unique superpowers to make it through in one piece.

This is one of the best beat ’em up games for Sega Genesis, and one that’s as exciting now as it was 30 years ago.

Help! An alien storm has descended upon Earth, threatening to wipe out the world as we know it. Only the Alien Busters — Karen, Garth, and Scooter — have any chance of saving it from certain ruin. Will you assume the role and save the world?

In Alien Storm, you must choose one of the Alien Busters and embark on a mission to… well… blast aliens and save the world. Journey from the streets of metropolis to the mothership itself, punching, kicking, and shooting your way through the space invaders.

This silly game was developed by Sega themselves, and features smooth mechanics and generally well-rounded gameplay. It’s not necessarily the most innovative title on this list, but it built upon Sega’s years of beat ’em experience to provide an exciting romp that’s (pardon me) out of this world.

As one of Sega’s crowning jewels, the original Streets of Rage was an instant classic that excelled in nearly every aspect. As such, it had a profound impact on many gamers’ formative years and is beloved by many.

Following in the narrative and mechanical footsteps of the Golden Axe series, you can choose from one of three characters (Adam Hunter, Axel Stone, or Blaze Fielding). Your mission? To free your city from the criminal organization headed up by the villainous Mr. X. In what has since become a genre staple, you must fight your way through the plentiful bad guys in each level, facing off against a boss at the end of every stage.

The way Mario defined platforming, the way DOOM defined first-person shooting, Streets of Rage defined what it was to be a beat ’em up. The controls, the enemies, the bosses, the music — everything was so well crafted. Moreover, the development team’s devotion and skill shine within every inch of the project.

Often cited by many as the best beat ’em up there is (with a fantastic soundtrack to boot), Streets of Rage was one of the must-have titles for Genesis owners, and for darn good reason.

What’s the only game that could top the original Streets of Rage? Why, it’s the sequel, of course!

Despite the ongoing debate about whether the first or second entry is the superior game, we’re placing it at number one. That’s an astounding feat, especially considering the circumstances under which it was developed and worked on by a mish-mash of different creative teams. While this typically spells disaster for video games, Streets of Rage 2 seemed to build upon each development team’s creativity, becoming ever-better and refined.

SoR 2 improved on the depth of combat from the first game with some excellent additions. First, it added two new archetypal characters named Max Thunder and Eddie Hunter (a Tank and a Scout, respectively). And, instead of a uniform special attack, each character received their own unique move that costs health to use, adding a layer of strategy unseen in rival titles.