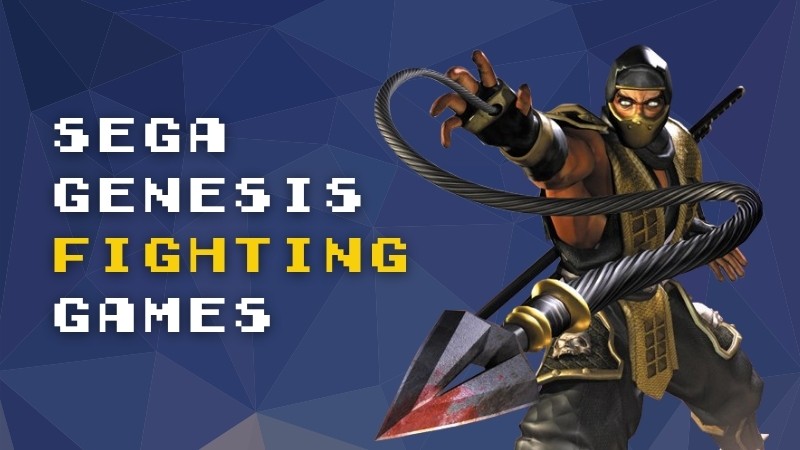 Back in the early 1990s, a war was waging in the homes of children around the world. A war between two video game consoles, vying to be number one. There was the mighty Nintendo SNES on one side, and the underdog challenger, Sega Genesis, on the other.

Such fierce competition meant both factions were working tirelessly to provide consumers with the next big thing. Although Nintendo had a sizable lead, a certain blue hedgehog came along and made Sega a legitimate threat. Following the trail blazed by the Blue Blur, Sega kept the pressure coming with new titles and entirely revamped genres. One of the most notable innovations at the time? The best Sega Genesis fighting games, which included acclaimed titles like Eternal Champions and Mortal Kombat.

This article takes you through some of the top fighting games on Sega Genesis and demonstrates exactly why Sega was such a threat.

Starting at #10, let’s work our way through the best Sega Genesis fighting games!

First on our list of best Sega Genesis fighting games is Samurai Showdown (known as Samurai Spirits in Japan).

Samurai Showdown is the quintessential fighting game, with one major difference. Instead of fists and kicks, it’s katanas and throwing stars! Every playable character comes equipped with classical Japanese weaponry, and it’s a bloody race to the finish every playthrough.

Unlike other fighting games from the time period, Samurai Showdown focuses less on combos and more on quick, decisive actions. The player that reads their opponent’s moves and strikes with voracity is the one who reigns supreme.

Samurai Showdown released on a number of platforms, but the Genesis variant featured several unique mechanics. For example? The Genesis version incorporated a locked camera angle, which led to more detailed graphics yet smaller stages.

Seeking an answer to Nintendo’s successful Punch-Out! series, Sega went after a more realistic take on the boxing genre. Since the Big N acquired the rights to use Mike Tyson’s name and likeness for their game, Sega shook hands with another boxing legend, Evander Holyfield.

Whereas Punch-Out! relied on the player’s mastery of timings, patterns, and their own reactions, Real Deal Boxing was a fighting simulation game that took a more authentic and adult angle. The main draw was Career Mode, where you could create a custom boxer — choosing their name, preferred hand, clothing, and appearance. As you progressed in the game, you continually enhanced your boxer’s stats and ratings until you faced off against Holyfield himself.

Possibly in a deliberate effort to set itself apart from PO!, Real Deal Boxing uses a side-facing camera (as opposed to the Nintendo game’s camera, which is directly behind the young Bronx bruiser). RDB’s UI and stats are also more informative, with head/body condition, energy meters, a current point score, and an overhead map all feeding intel to the player.

While it filled the niche of legitimate boxing games on the Genesis, the game’s execution was lacking.

While Dragon Ball Z: Buyū Retsuden was never officially released on Sega Genesis (only on Europe’s variant, the Mega Drive), we couldn’t help but include it on this list. Dragon Ball Z is an iconic gaming franchise, and it wouldn’t be where it is today without the help of Sega’s 16-bit platform.

A considerable difference from other fighting games (like Street Fighter) was the ability to switch between fighting on the ground or freely in the air, a common occurrence in the DBZ universe. This unique mechanic made the fighting arena immense by comparison, and required a split-screen viewport to compensate for such a wide range of movement.

DBZ features 11 iconic characters from the anime series, including Goku, Freiza, Cell, and Vegeta. Each character has two meters: one for their health and another for their “force,” which slowly builds up over the course of encounters. Once full, the player can unleash a deadly super move, at which point the meter resets and begins recharging. Player health also regenerates, facilitating more aggression from players once an opportunity reveals itself.

You’ll get much more enjoyment out of this if you’re a DBZ fan, but this high-flying fighter is still good fun even if you don’t enjoy the cartoon.

Virtua Fighter was a staple of Sega’s fighting game catalog, and the second installment brought a unique, more methodical approach to the genre.

Think about it. When the genre you want to make a game for is dominated by such established and lauded titles, it’s imperative that you generate a real identity for your project and allow it to stand out on its merits. Virtua Fighter had a number of characteristics that separated itself from others.

First, matches took place in an “arena,” where falling off or out of the customizable fighting zone would result in a loss. This added a different dynamic and comeback element to the game, where the more intelligent (not necessarily more skilled) fighter could emerge victoriously.

VF2 also earned a lot of praise for its graphics, the quality of which was unseen at the time. The use of 3D not only made the game look better, but it added an entirely new axis for dynamic movement and more strategy! The game also featured a quirk where, by setting players’ life gauges to infinite, you could make “ring-out” only matches, an unintentional but cool by-product of the customization panel.

Virtua Fighter 2 may be less remembered than Mortal Kombat or Street Fighter, but it’s still one of the best fighting games Sega Genesis has to offer.

Next up is King of the Monsters 2.

This is a unique title on our list of best Sega Genesis fighting games for several reasons. The most notable is that King of the Monsters 2 exists in multiple forms. There’s the original game, created by SNK, which features side-scrolling beat ’em up mechanics. Then, there’s the Sega Genesis version, which boasts the same roster of characters, but removes the beat ’em up mechanics and transforms the title into a one-on-one fighting game!

In the Sega Genesis version, you’ll play as one of the game’s powerful monsters. Choose from kaijus like Huge Frogger or Lavictus, and make expert use of their abilities as you go head to head with other deadly beasts. The catch? Every time you kill one monster, another one spawns — just like a Hydra! Can you pull a Hercules and wipe ’em all out for good?

King of the Monsters 2 is an excellent fighting game that’s fun to play solo or with a friend.

The Fatal Fury series has built a renowned reputation and dedicated following from fans of fighting games. Although it started life on the NeoGeo, one of the most iconic FF games in the series was King of Fighters on the Sega Genesis.

Fatal Fury: King of Fighters’ unique feature was its use of two different “rows” in which to duke it out. Players could jump between the foreground and background to trade blows, which introduced a new layer of strategy to the fighting game genre. The game also had a unique mini-game mode, which included an arm-wrestling button basher for added fun.

In recent years, Fatal Fury has undergone a revitalization of sorts. This is primarily due to Super Smash Brothers, which introduced series legend Terry Bogard into its character roster.

Where the original version of the game featured mostly fictitious boxers, Greatest Heavyweights lives up to its name and pulls out all the stops, bringing you a boxing title where you can don the gloves of actual Hall of Fame fighters. The game features licensing for numerous legends of the ring, including stars like Larry Holmes, Jack Dempsey, Joe Frazier, Muhammad Ali, Rocky Marciano, and the previous game’s poster boy, Evander Holyfield. The boxers are given real personalities, too, with true-to-life taunts, quotes, and mannerisms from the real-life fighters.

The most discernible improvement from the original is how much faster the game is, reflecting the vicious velocity of real boxing. The game was also updated to be compatible with Sega’s iconic six-button controllers, leading to more nuanced and actionable gameplay. The Career Mode remains mostly the same, only introducing a gauntlet of challenge matches against all the game’s big names.

A real love letter to boxing fans but much more than just fan service, Greatest Heavyweights is a genuine contender to Nintendo’s boxing series and far from a copycat imposter.

You might be quick to dismiss this as a clone of one of the more popular and established fighting games that came before it. However, Eternal Champions does enough to establish its own identity, and is very much one of the best Genesis fighting games in its own right.

Like many fighting titles, the game incorporates a background story and context, rather than just different people meeting up and punching each other in the face. The world’s existence is in jeopardy, and a mysterious figure dubbed “The Eternal Champion” has brought nine people (whose lives were previously cut short) back to life to fight in a tournament. The winner will become the champion to save Earth from a terrible fate.

EC featured the hallmarks that its predecessors had, including combos, grabs, and light/medium/heavy attacks. It also had its own version of Mortal Kombat’s fatalities called Overkills, although these were specific to the stage you fought on. The characters were all distinct, and some even had weapons to set themselves out from the crowd.

That said, the game did have an issue where, if you didn’t have a six-button controller (or a Sega Activator), you would have to use the Start Button to switch between the controls for kicking and punching. This is far from ideal, of course, but Eternal Champions is still worth a try for fighting fans.

Legendary for being so violent it forced the creation of the ESRB, the Mortal Kombat series is everything the fighting genre should be.

Although the Genesis was home to numerous MK titles, we selected Ultimate Mortal Kombat 3 due to its depth and exceptionally balanced mechanics. That said, it may not be the title you remember playing, as every gaming platform incorporated different rules and modes.

For instance, the Sega Genesis version (unfortunately) lacked in the graphical and audio departments. But it more than made up for that with its own assortment of unique content within the game. The unique content in question? It included new stages and the ability to play as certain characters like Rain or the punishing Outworld emperor, Shao Kahn. It also included Brutalities, the long-winded and ridiculously extensive combo finishers.

Mortal Kombat is loved mainly because it unashamedly indulges in the almost calamitous violence that it pervades. By this point in the series life, MK was simply adding more and more features and elements to its repertoire, and Ultimate MK3 was a definitive high point in the franchise.

It’s obvious why it graced so many systems.

Street Fighter practically invented the fighting game genre as we know it today. Although the first version of the game never made its way to the Genesis, Street Fighter II: Champion Edition clawed its way into Sega’s gaming ecosystem, much to the excitement of gamers everywhere!

The Champion Edition featured the same fighting game mechanics from the original, including loads of badass characters, moves, and — of course — combos. The major differences between the versions? The Champion Edition incorporated new-and-improved Shadaloo Bosses, as well as more balanced mechanics and an enhanced PvP mode!

Street Fighter II: Champion Edition released to critical acclaim and is regarded as one of the best fighting video games of all time. If you haven’t given it a playthrough, it’s about time you meet Ryu and the gang and fight your way through waves of enemy scum.