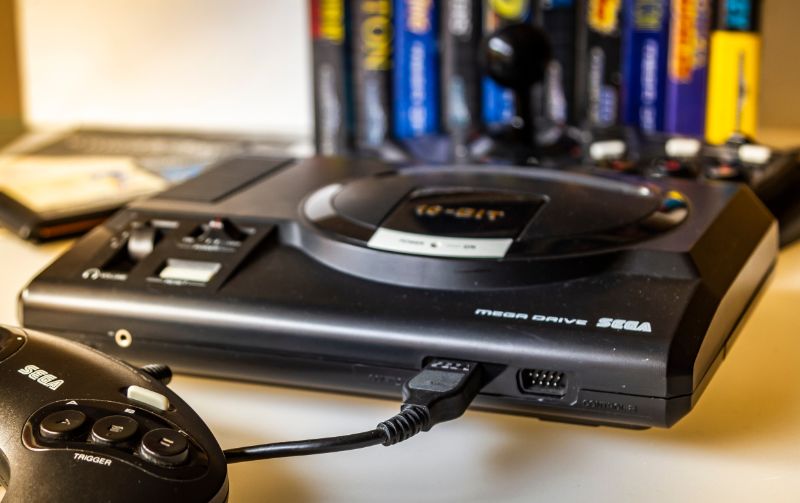 In this week’s article, we’ll be exploring the best Sega Genesis RPGs. Buckle up for a mad dash down memory lane as we dive into these classic gems from the ’90s.

Remember all those pen and paper RPGs from the ’80s and ’90s — games like Mythworld and Dungeons & Dragons? Back then, there were no role-playing video games like we know today. That is, until consoles like the SNES and Sega Genesis (AKA Mega Drive) came out and brought those adventures to our home televisions!

While Sega isn’t renowned for its library of RPGs (that honor goes to Nintendo), the Genesis was home to a handful of stellar role-playing and action crossovers. To showcase these 16-bit gems in all their gritty glory, we’ve curated the 15 finest RPGs from the little black and white console. Join us as we embark on a quest to check them out!

Let’s dive right into action with an in-depth look at the best RPGs for the Sega Genesis.

Set one millennium after Phantasy Star II, Phantasy Star IV has you assume the role of a young hunter named Chaz Ashley. Within a fantastic world with a medieval-technology blend, you and your allies must control biomonsters to stop a long-buried enemy from destroying your world.

The translation could’ve been better, but you’ll be too swept up in the super-atmospheric anime-inspired graphics and addictive battle music to notice.

A thief steals two jewels, and the king kidnaps a girl — two smaller crimes that, together, unleash the deadly Zeon upon the world. Now it’s up to you, the Shining Force, to stop him. To form your team, choose from over 20 characters and build a 12-warrior force with weapons and magic.

From the creators of Shining in the Darkness comes Shining Force II, a free-roaming turn-based tactical RPG (and a Genesis staple). Its intense battles keep you pumped up for each mission, and it’s versatile enough for casual players.

While you can’t promote your characters until the higher levels, the incredible cinematic battle sequences, awesome monsters, and drama-rich themes make this super-satisfying game worth the wait.

It’s 2050, and everyone’s information is on mainframe files in a dystopian Seattle. You’re Joshua, and you build karma by going on illegal shadowruns for Mr. Johnsons, while simultaneously trying to save the world.

Long before the movie, this world had the Matrix. If you love cyberpunk and real-time combat, this open-concept action RPG is the game for you. The Genesis version is far superior to the Super Nintendo one, stays true to the books, and comes without Nintendo’s censorship.

Some may find the fighting simplistic, but the unique karma system and Matrix-hacking possibilities make up for it. The techno music, realistic graphics, and unlikely marriage of cyber technology and magic make for a deliciously gritty masterpiece.

Assume control of the mighty warrior, Prince Ali, as you solve puzzles and use physical force and weapons to save the mystical island of Oasis. In an unprecedented feature, you can dig deep in secret challenging areas to get more powerful weapons.

Also known as the Story of Thor, this is a rare top-down action RPG on the Genesis. It’s similar to Zelda, but here you can jump, duck, and run. The beat-em-up style includes an engrossing battle system and all sorts of elemental magic.

With the beautiful pixel art and sprite work, the game would be perfect if it weren’t so short.

You’re treasure hunter Nigel, and you have to outmaneuver the evil duke before he nabs all of King Nole’s treasures. Hack and slash your way as you explore the dungeons and solve the villagers’ problems for clues.

Instead of saving the world, you get a charming smaller-scale approach in this action-adventure open-world RPG. Another rarity for 16-bit action games is the unique 3D-like isometric viewpoint and lighthearted story.

Enjoy the bright soundtrack and outstanding dialogue, but prepare for some extremely challenging combat. The leveling system is reasonable, although the platforming can make navigation slightly awkward.

As the son of Erik, King of Excalabria, you’re on a quest to avenge your father and free your world from evil. Battle evil creatures and pick up weapons and other useful items on your way.

Hardcore RPG fanatics will dig this action game’s engrossing open format. Combat is in real-time, and you can use weapons and magic as you move through different views.

It’s one of the best Sega Genesis RPGs overall, and Sega themselves developed it!

You begin the game as a group of adventurers who find themselves in an unknown land. Your mission? To fight off hostile assailants and return your party to safety, before everyone goes completely mad!

It doesn’t get any more old-school than the first and only official D&D game for the Genesis. Explore dungeons and slay monsters in this western-style RPG. You get multiple views, and you can have various characters in action.

Enemy encounters are fast and real-time, but the rest of the game can feel slightly slow-paced (despite the impressive sound effects and graphics).

Still, it’s one of the best Mega Drive RPGs, bar none.

You’re a blue-haired boy with nothing more than a sword and leather armor. Explore and destroy enemies to save the kidnapped princess, but take heed — you can only move to the right!

This side-scrolling open-concept action-adventure RPG has aged well. Its graphics still hold up and are cute without being over the top. You have to grind if you want the best weapons, but there are grinding areas next to each town.

The smooth animations come with bright, glare-free colors. With memorable music and cute but deadly monsters, we can forgive the super-slow text.

Overall, it’s one of the best RPGs for Mega Drive and Sega Genesis.

Also known as Langrisser: The Descendants of Light, Warsong is among the best Sega Genesis RPGs ever made.

In Warsong, you start out controlling a small group of military commanders with nothing but a simple brief regarding the mission ahead. Then, you assign an army to each commander and ready yourself for combat. After that? Let the mayhem ensue!

Crazy about tactics? This underrated strategy turn-based RPG provides over 30 hours of rigorous decision-making. The highly detailed gameplay even lets you automate your pieces’ movements.

Our single gripe would be that if a commander dies, all their soldiers die as well. We won’t hold it against the game, though. Need to get up? You can save your progress at any time!

Begin the game as Adol, a run-of-the-mill explorer. You and your friend Dogi are headed to his country to see what the world has in store. But thinks quickly turn south, as you discover the Dogi’s friends are in danger! Time for combat.

Enjoy the smooth graphics and distinctive soundtrack as you save Dogi’s people from evil!

Unlike the previous Ys games, this action RPG goes from a top-down to a side-scrolling perspective. This gives you better control over your character.

You’ll need to start grinding immediately to get ahead, so don’t give up if this game feels too hard at first. As one of the best RPGs for Sega Genesis, it’s well worth the effort.

This turn-based strategy RPG understands that some gamers enjoy amassing resources with little or no other end. And the game isn’t shy about exploiting that.

Begin the game with a small army of soldiers, as you set out to explore four distinct continents. Your goal? To seek out and return the King’s Sceptre, a remarkable artifact with infinite power. Collect resources and use your skills as a leader to strengthen your soldiers along on the journey, else risk failing and returning home empty-handed.

The king is counting on you to return his bounty, before death do you part. Think you’ve got what it takes? King’s Bounty awaits.

Choose between a fighter and a wizard, then start your quest to save the princess. But be wary — you’ll be up against a number of adamant bosses, and death comes with devastating losses.

Converted from a four-player arcade game, this elaborate two-player platform action RPG comes with side-scrolling mechanics that were nearly unprecedented back in the day. A lovely sight. You’ll also enjoy excellent play control and a well-implemented currency system. The catch? You can’t save your progress.

Still, with its fun graphics and high-fantasy soundtrack that fits the narrative to a tee, this is one of the best RPGs for Genesis when it comes to overall aesthetics.

You’re a master swordsman with only your intelligence and sword to survive the deadly labyrinth and save innocents snatched up by dark magic.

This overlooked action RPG is a typical dungeon crawler with memorable SEGA sounds, excellent playability, and an isometric view. Mix and match magic spells and solve puzzles to your heart’s content!

The only downside to this game is that the isometric controls may make movement awkward.

On the night of the millennium’s full moon, four brave warriors must retrieve the Sword of Light, stolen by evil sorceress Castomira. Here’s a hint if you can’t pick: The archer can nab off-screen enemies.

It may feature a simple save-the-day story, but this top-down shoot-em-up RPG is packed with action and beautiful sprite work. The free-roaming concept lets you move in any direction and get help from various NPCs.

One caveat, though: first-timers might find it a little confusing.

While the rest of this list is in no particular order, Crusader of Centy is the best Sega Genesis RPG (in our opinions).

Recruit 16 furry friends (each with its own special technique and effect on your sword) to help you on a mysterious quest that threatens your way of life. Think you’ve got what it takes?

Also known as Soleil, this top-down action-adventure game is story-driven and often called a Zelda clone. It has a catchy soundtrack and is one of the best-looking 16-bit games despite the limited color palette.

We loved the lighthearted tone, goofy dialogue, and impressive sprite work. That said, it’s a little too linear for an adventure game. But we dig all the powers you can borrow from your animal companions.

Unbelievably, many incredibly awesome RPGs still don’t have English translations. But if you speak French or Russian, you’re in luck. Some games, like the epic Surging Aura, have been translated into both languages.

Dedicated fans have successfully translated some of these other games into English, like Monster World IV and Warsong sequel, Langrisser II.

No translation but still dying to play? If you’re too impatient to wait, just grab a dictionary and dive in, translating as you go!

Feeling glum over new games that’ll never measure up? If there are developers who miss the golden 16-bit days so much that they created Pier Solar and the Great Architects for the Genesis in 2010, then all hope is not lost.

In the meantime, dust off that SEGA Genesis (or that emulator) and go slay yourself some dragons. Victory awaits, warrior!