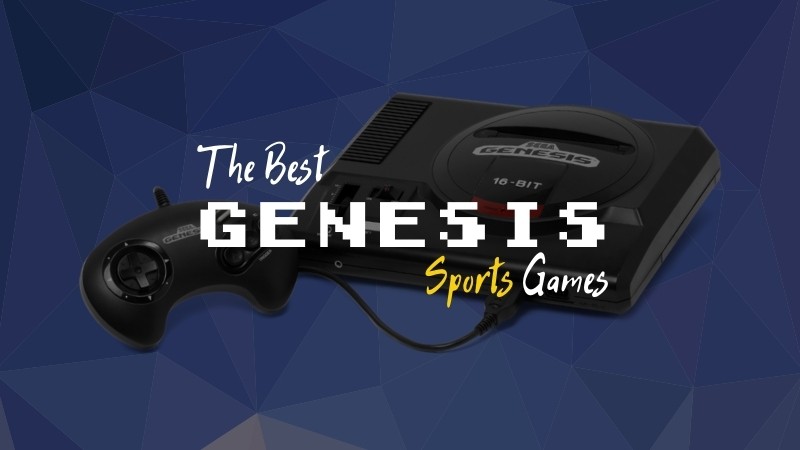 The Sega Genesis was the cool console of the early 90s. Whereas the SNES had an innocent, child-friendly reputation, the Genesis was loud and proud, featuring sophisticated titles designed for an older audience. Case in point? Just look at the best Sega Genesis sports games, which solidified Sega’s place as video gaming’s most popular jock.

Over its 5-year lifespan, the Sega Genesis introduced dozens (if not hundreds) of different sports titles. The console’s superior 16-bit architecture offered more realistic gameplay, and developers were chomping at the bit to secure licensing deals for the platform. From hockey to football, to baseball and more, the Genesis let you play virtually every sport from the comfort of home.

While they weren’t all home runs, this article showcases the best Sega Genesis sports games from the 90s — exceptional titles that’ve become a centerpiece of Sega’s legacy.

Here’s a look at the best Genesis sports games covering the most popular athletic activities from the 90s.

Are you ready to ruuuuuuuumble?

First on our list of best Sega Genesis sports games is WWF Royal Rumble. Based on the WWF (World Wrestling Federation) league from the 90s, this game incorporates all your favorite wrestlers and wrestling moves of that time period.

Choose your fighter, enter the ring, and wrestle it out in various modes, including One-on-One, Tag Team, and Triple Tag Team! Get up close and personal, paying careful attention to the on-screen grappling meter until the ref finishes the countdown. Or, whack ’em with a chair and send ’em flying out of the ring. The choice is yours.

Although WWF Royal Rumble was also available on the SNES, the Genesis version included the man, the myth, the legend himself — Hulk Hogan. This makes it one of the top wrestling games of the decade, with rave reviews from fans and critics alike.

Long before Serena Williams and Novak Djokovic, there was Pete Sampras.

Pete Sampras is widely regarded as one of the best tennis players of the 90s, and fans of the sport couldn’t get enough of him at the time. Sensing an opportunity, Zeppelin Games teamed up with the legendary player, and Pete Sampras Tennis was born!

Gameplay is fairly simple, albeit true to life. Take to the court and send the tennis ball flying within Challenge, Tournament, and World Tour modes. Or, try your hand at something a bit whackier in Crazy Tennis mode, which is an arcade-like experience that sees you whacking as many balls as possible within an allotted time frame.

While it’s not the best Sega Genesis sports game out there (the AI was notoriously bad), it’s still a romp to be reckoned with. And, it just so happened to top our list of rare Sega Game Gear games!

Volleyball isn’t as popular as other sports on this list, but it’s still a respectable pastime among casual athletes. That’s why we’ve included Super Volleyball, a platform game that mimics the titular sport.

The rules of the game? Simply select your team, arrange your roster, and prepare to volley! Serve, spike, and strategize your way to victory against the world’s most prominent volleyball teams. Do you have what it takes to win?

While Super Volleyball is a solid game (and worthy of its place on this list of best Sega Genesis sports games), it’s not the most exciting title. The controls are basic, and gameplay loses its luster after a short while.

For a more action-packed title that’s sure to hold your attention, it may be time to step into the ring…

Greatest Heavyweights is one of the best Sega Genesis sports games for boxing fans. What makes it so special? Well, the game features pixel caricatures of the greatest fighters from the 20th century, including legends like Jack Dempsey, Joe Louis, and even Muhammad Ali!

It also provides the opportunity to cement your own legacy. That is, if you’re up for the challenge.

How does it work? To start, you need to create and customize your very own boxer. Then, select between Career, Exhibition, and Tournament modes, and prepare to enter the ring. Throw quick jabs, nasty hooks, and powerful uppercuts until your opponents go down and you’re the last one standing.

Before the Sega Genesis, golf was a rich man’s sport. Then came along PGA Tour III, which opened the game up to the masses.

PGA Tour III takes you on an, er, tour of various TPC (Tournament Players Club) golf courses across North America. Choose one of 11 different pro golfers from the 90s, and play in a tournament of epic proportions. Par won’t cut it in PGA Tour III, meaning you’ll need to eke out Birdies and Eagles, paying close attention to the power, accuracy, and wind meters as you swing and putt.

PGA Tour III was a Sega exclusive, and its vibrant graphics combined with realistic gameplay absolutely shined atop the Genesis’s 16-bit architecture.

Hey batter, batter! If you’re a baseball fan, this is one you don’t want to miss.

Sports Talk Baseball replicates the real-life sport down to a tee. The rules and mechanics are nearly identical to the Major Leagues, except it’s the first team to 10 runs that wins. Makes sense — nine innings can take a long time to play out.

The character roster features real players and player stats from the 1991 MLB season! Use these characters to build a dream team, then assign each one to different positions by gauging their in-game strengths and weaknesses! The game incorporates a stunning number of real-life baseball mechanics, including different batting stances, pitching styles, and more.

One of the coolest parts about this game? The live commentary, with play-by-play analysis from voiceover experts (hence the name, Sports Talk Baseball)!

Who hasn’t played FIFA? The series has been around for nearly 30 years, and it’s one of the most popular and highest-grossing game franchises in the world.

Where did it get its start? On the Sega Genesis, of course, way back in 1993. But it was the 1995 edition that scored the most goals with fans and critics.

FIFA Soccer ’95 was the second game in the FIFA lineup, and it fine-tuned a bunch of mechanics from the original, including passing and goalkeeping. That said, most gameplay mechanics remained the same — namely, there are two teams of 11 players matched up against one another, and you’ve got to score the most goals within the time limit to win. Swap between players on your team with a click, maneuvering around the field and juggling the ball as you go. Then, when the opportunity strikes, take your shot!

FIFA Soccer ’95’s isometric viewpoint provides an excellent overview of the playing field and makes it easy to understand and play. It’s absolutely one of the best Sega Genesis sports games ever made.

The next sport on our list? It’s finally time for some football!

No, not that football — American football! More specifically, Madden NFL ’95.

Before Madden, football games were mediocre attempts at capturing the game’s complex mechanics. Madden changed all that by securing an all-star team of devs, working with genuine football pros, and incorporating rules that were nearly identical to the NFL’s.

For those unfamiliar with the sport, gameplay features two teams of 11 fighting their way across the field to score touchdowns in the opposing team’s end zone. Run and pass your way to victory on offense, and shoot for tackles and interceptions on defense. Teams with the highest score at the end of each round wins.

There were several Madden games on the Sega Genesis, but fans and critics particularly adored ’95 for its intuitive and true-to-life gameplay.

This stellar basketball game incorporates all the basketball mechanics you know and love (two teams duking it out on the b-ball court), but with a twist. Although NBA Jam remained true to the rules of the game, it sprinkled in some “slapstick” silliness.

For instance, players can jump extremely high (as in, above the hoop itself), and there is no penalty for unsportsmanlike conduct such as pushing or shoving. But these intentional design choices, combined with the game’s vibrant graphics, don’t detract so much as they add a charming, whimsical effect to the title.

NBA Jam was one of the best Sega Genesis sports games in its own right, but the Tournament Edition was even better, adding in Tournament mode, player attributes, and a new in-game announcer.

Our #1 pick among the best sports games for Sega Genesis? That honor goes to NHL ’94, one of the greatest hockey games ever made.

When launching the title, you can choose between four modes: Best of Seven Playoffs, Exhibition Game, Playoffs, and Shootout. These modes vary in their scoring mechanics, but the game’s rules and flow remain fairly consistent, incorporating NHL (National Hockey League) rules and mechanics.

Assume control of your entire team (switching between players as you move across the rink) in your effort to score the most goals. Use the game’s lovely top-down view — complete with detailed sprites and graphical models — to your advantage by looking across vast swaths of the rink and strategizing as you go.

The game was a major hit at the time of release, and it’s only grown in popularity since. Today, it’s widely recognized as one of the best sports video games ever, largely due to its realistic mechanics and nuanced gameplay.

From start to finish, NHL ’94 is as polished as an ice rink after the Zamboni.