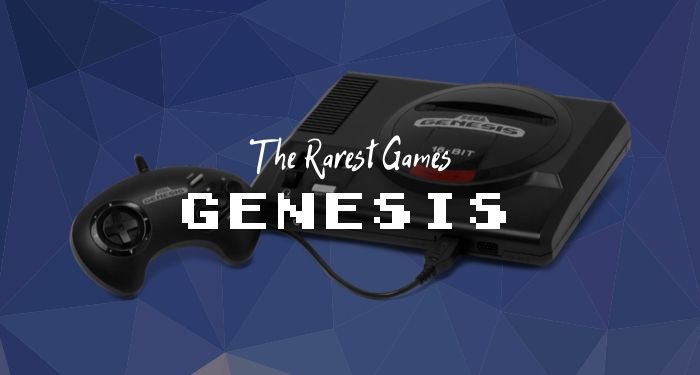 Curious about the most expensive Sega Genesis games? We’ve got you covered.

First released in 1988, the Sega Genesis (known as the Sega Mega Drive outside the US) introduced the world to Sonic the Hedgehog, Mortal Kombat, and countless other gaming icons. In the years since, Sega Genesis games have become highly collectible, steadily increasing in value and rarity.

Overview of the Most Expensive Sega Genesis Games

Each game listed below has been researched and ranked based on its estimated retail value in complete-in-box, or CIB, condition. Moreover, we’ve used various sources to develop this list, including real data from recent auction transactions.

The result? An up-to-date reference that you can rely on. Check it out below.

The 15 Most Expensive Sega Genesis Games: An In-Depth Guide

Next, let’s dive a bit deeper with a look at what makes each title so valuable.

Tetris, the wildly popular video game that’s become synonymous with puzzlers, is the most expensive Sega Genesis game in existence.

Originally slated for a 1989 release, production of Tetris for the Sega Genesis ground to a halt due to legal issues with rival developer Nintendo. Sega was forced to stop production of Tetris cartridges and scrap what remained from the assembly line. Everyone thought they were gone… until one mysteriously appeared on the market a few years later.

Today, it’s estimated that there are roughly 10 Tetris cartridges left in existence, though they rarely come up for sale. One of the few times a copy did enter the market, it was priced at a cool one million dollars. While you’d be hard pressed to find a buyer at that price, the owner has indeed turned down offers around $50,000. That makes Tetris the rarest Sega Genesis game in history.

Outback Joey was Sega’s attempt to enter the fitness market, much like Wii Fit from Nintendo in the late 2000’s. The premise? Players would set up a stationary bike in front of their TV and attach the Heartbeat Personal Trainer to monitor their vital signs (see this video). Then they’d start pedaling to move Outback Joey towards his on-screen destination. Sounds cumbersome, eh?

Well, it was. And the game never caught on. This forced Sega to stop production after only 1,000 copies of Outback Joey had been produced. Nowadays, collectors must shell out big bucks to get their hands on a CIB set. The exact number? It’s hard to pin it down precisely, but recent sales data points to a value of around $10,000 for complete sets.

Blockbuster World Video Game Championship II was a promotional game developed by Acclaim. The cartridges were designed to be distributed to Blockbusters around the country for an in-store gaming contest, but the event never took place.

Similar to the Tetris story, company executives ordered the destruction of all existing cartridges. But somehow, a few of them managed to survive. The game is now a hot (and exceedingly rare) collector’s item. The price? Well, a 2015 auction for a pristine copy sold for over $2,500, and a more recent (2020) auction sold at $4,500!

This cartridge didn’t come with a box, and its plain exterior is a great reminder of why you should never judge a book by its cover. Next time you’re at a flea market or garage sale, be sure to leave no game unturned!

The sequel to the side-scrolling shoot ‘em up classic, Battle Mania 2 (known as Battle Mania Daiginjō in Japan) is a must-have Sega Genesis import. The game was well-loved in Japan thanks to its exciting jetpack-fueled gameplay and cute anime characters. That, combined with its limited release, makes it a highly valuable Sega Genesis game worth up to $1,700 bucks.

Do note that you’d need a Japanese Sega Genesis (Mega Drive) to actually play the cartridge.

Ecco the Dolphin is a puzzle & adventure crossover game that has players use echolocation to navigate underwater obstacles. It was a very popular game in the early 90’s, and there are tons of copies available for a reasonable price. So why is it featured in this list of the most valuable Sega Genesis games?

Well, a special boxed set was created to support a non-profit London aquarium that had a real dolphin called Ecco. This special set featured the game, a t-shirt, an audio tape, and a handful of other goodies (see this video). Only a handful were ever sold, and most of those were broken up or lost in the years since. The result? A price point of roughly $1,500 for a CIB set.

Crusader of Centy is an action RPG title that boasts immersive gameplay and entrenching storylines. It draws a lot of inspiration from titles like Zelda, and features many of the same medieval fantasy mechanics. The game was published by Atlus, a company known for low distribution numbers.

Eliminate Down is a side scrolling shooter developed for the Sega Mega Drive. The plot? It’s the 30th century and an alien invasion of Earth is underway. Take command of the Steel Pyron starship and use your entire arsenal to fight back the Amuleto invaders. Think you’re up for the challenge? The fate of the world rests in your hands.

Eliminate Down was a hit thanks to its fun yet challenging gameplay. Nowadays, the title is a hot commodity, and pristine CIB copies can go for $1000 and beyond!

Panorama Cotton was a marvel back in the day due to its 3D-esque graphics (think Mario Kart on the 64) and action-packed shoot ‘em up gameplay. But that’s not what puts the game at #6 on our list of the most expensive Sega Genesis games.

So why is it number six? First off, only 5,000 copies of the game were made. This would position it as a highly collectible item in its own right. However, there’s also an accompanying Panorama Cotton Tea Cup that was given to game owners who sent a special voucher in to Sunsoft, the game’s publisher. Today, only 300 sets of the game and tea cup are thought to exist, and they can easily fetch $900+ on the retail market.

Number 7 is different than the others on our list of most expensive Sega Genesis games since it’s more a collection of titles than a single game. We’ve bundled them together, however, since they’re all roughly the same price. Plus, they feature the same superhero theme.

What are the games, you ask?

The titles in question include Justice League, Batman Forever, and Maximum Carnage. While the English versions of these games are in great supply, Japanese copies for the Mega Drive are much rarer, with values as high as $800.

Megaman is an iconic figure from the 16-bit era, and The Wily Wars is the Genesis’ take on the blue hero. This version combines the first three Megaman games with an additional game mode featuring new enemies and a challenging boss level. Due to Megaman’s popularity, The Wily Wars can fetch as much as $800 for a boxed set.

If you’re a shooter fan, MUSHA is a must have for the Sega Genesis. The game features vertical scrolling shmup mechanics, as well as fantastic graphics and an immersive soundtrack. As for the plot? Players must enter a flying mecha machine that’s tasked with stopping a superintelligent AI threat.

MUSHA was developed by Compile and released early into the Genesis’ lifecycle. Its early release combined with exciting gameplay and a near cult-like following makes MUSHA one of the most valuable Sega Genesis games on the US market.

The Phantom 2040 boxed set features the superhero known as The Phantom, as he fights his way through Metroidvania-esque levels in an all-or-nothing battle to save the world. This particular version was only sold in Australia, and it came with a collectible set of stickers as well as a special Phantom keyring.

If you manage to find a complete set in the box, you’re looking at upwards of $600.

The Australian Mega Drive version of Fatal Fury 2 is worth big bucks. This is largely due to Final Fury 2’s thrilling gameplay, excellent 16-bit graphics, and immersive story. The premise? The King of Fighters tournament is back on, and players must take control of a warrior contestant to uncover an assassination plot. Punch, kick, and strategize your way to victory!

We highly recommend checking this one out, though its sky-high $550 price tag may be a barrier to entry (unless you have a retro game box or emulator.

Alien Soldier is another highly collectible title from the Sega Genesis. This is largely due to its endearing side-scrolling and run ‘n gun mechanics, as well as its challenging gameplay. The premise? It’s the year 2015 and humans have created a super race hellbent on world domination. Assume control of Epsilon-Eagle as he runs, jumps, and takes down his enemies with ruthless conviction.

The game was released to critical acclaim in the European and Japanese markets, but it never made its way across the pond. That makes this sought-after title worth nearly $500 in CIB condition.

Developed by Software Creations, Maximum Carnage is an exciting superhero game featuring Spiderman and Venom. The title was a major hit in the US and abroad, cementing its place as a core title in the Sega Genesis library.

This particular version was sold exclusively on the American shopping network known as QVC. It was marketed as a collector’s edition that featured the game, lapel pins, and a limited edition comic book. It’s not clear how many were sold, but superhero fans aren’t exactly the network’s target audience. If you manage to get your hands on one, CIB copies sell for roughly $500.