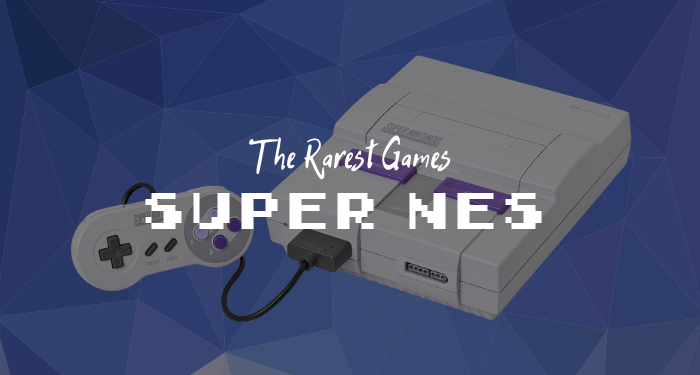 The SNES is the BEST! From Mario World to Legend of Zelda, the Super Nintendo features a ton of amazing titles. Nowadays, many of these are quite elusive, and getting your hands on an original copy is no easy task. That’s because the rarest and most expensive SNES games are (literally) worth a fortune.

Starting with #10 and working our way down, let’s take a closer look at the 10 rarest SNES games on the market.

In the late 90’s and early 2000’s, Hagane: The Final Conflict was an obscure yet affordable SNES game. It was originally a Blockbuster exclusive titles, so there weren’t many copies around. Still, the Ninja-inspired game remained in the shadows into the early 2010’s. Then, everything changed when The Angry Video Game Nerd attacked.

What happened? He and his team released a viral video detailing some of the rarest SNES games on the market. And… that’s when Hagane: The Final Conflict blew up.

Prices skyrocketed and collectors could hardly wait to get their hands on a copy. The game’s platformer gameplay that fuzed ancient Japanese culture with modern mechanics was a surefire hit that’s since become a cult classic.

Are you an import collector? If so, Rendering Ranger R2 is one of the greatest & most expensive SNES games around.

What’s it about? Players assume control of the Rendering Ranger–space superhero–and embark on a mission to defend Earth from alien invaders. Shoot lasers at your enemies, collect stat-enhancing powerups, and pay close attention to your health–there’s no continue feature should things go wrong.

Released in Japan in November of 1995, Rendering Ranger received mixed reviews. Some critics lauded the game for its fast-paced and unforgiving shooting mechanics. Others deemed it just another shooter. By the time the US port was finally done, Nintendo had already moved on to other, more marketable titles. The project was ultimately shelved.

The result? Japanese imports of Rendering Ranger sit at #9 on our list of rare SNES games, with complete copies fetching well over $2000.

Aero Fighters, AKA Sonic Shooters, was a Japanese arcade game released in 1992. After receiving rave reviews, Video System ported the game to the SNES before publishing it worldwide.

Though its shooting mechanics are nothing special, the game is renowned for its amazing storytelling. Players choose between several different characters, with each representing a nation. They then compete across seven different stages in hopes of conquering the world.

Manage to pull through, and you’re treated to a special cut-scene that’s unique to your character. Pretty cool, especially back in ‘92.

Its legacy (and scarcity in the US) makes this one of the most valuable SNES games worth money. Exact numbers? You’re looking to pay $650 for loose copies and into the thousands for mint versions.

Do a barrel roll! Do you have a copy of Star Fox: Super Weekend hidden in your collection? If so, dedicated SNES collectors will pay you some serious money for it.

Back in ‘93, Blockbuster Video locations hosted Nintendo tournaments right in the store. One of these tournaments was for the newly minted Star Fox franchise, and a special version of the game was made in its honor. Namely, Super Weekend.

After the tournament was over, remaining copies were made available to subscribers of Nintendo Power. There were only 2,000 or so listed, and they quickly sold out.

Fast forward 2 decades, and you’ll find that the price of this game is higher than Star Fox and his fleet of ships! Its $1100 price tag puts Super Weekend right at #7 on our list of the most expensive Super Nintendo games ever made.

You’ve been training for months, and the day has finally come. You step out of your apartment in picturesque Tokyo, and head to the nearest game shop. Today’s the official Super Famicom Dodgeball Tournament, and you’ve just got to win!

The gold cartridge version of Kunio-Kun no Dodge Ball: Dayo Zenin Shuugou! (AKA Super Dodgeball) was awarded to the victors of Super Dodgeball tournaments in Tokyo, Japan.

Even though the developer, Technos Japan, hosted several tournaments throughout 1993, relatively few copies were manufactured and distributed. As a result, the game is incredibly rare and valuable, particularly in North American markets.

This puts Kunio-Kun no Dodge Ball at #6 on our list of rare Super Nintendo games.

Go Speed Racer! Much like Outback Joey for the Genesis, this 2-in-1 Mountain Bike Rally & Speed Racer cartridge is a fitness enthusiast’s dream.

It works like this – you insert the cartridge, link up your Life Fitness “Extertainment“ Stationary Bike, and pedal forwards to move your on-screen character. You get a high-intensity workout from the comfort of your home, and you make progress in your favorite SNES racers. It doesn’t get much better than that!

Unfortunately, the game was a dud. Given the Extertainment Bike’s exorbitant price, few copies ever made it to market. In fact, the majority of remaining copies were pilfered from the Nintendo of America warehouse in Los Angeles, California.

Before virtual reality and high-resolution simulations, console video games were the best way to prepare for combat. And the US military was at the forefront of this innovation.

Introducing M.A.C.S. Multipurpose Arcade Combat Simulator. This combat simulator was paired with a Jäger AP 74 Rifle accessory and distributed to military bases across the country. Its purpose? To teach recruits how to shoot under pressure.

The Jäger AP 74 accessory has the look and feel of a genuine rifle, and it includes all the bells & whistles, including a scope, light sensor, barrel, and more. Aim it at the screen, and take out the dummies with pinpoint accuracy (check out this awesome video)!

These cartridges are extremely rare. Rumor has it that there are under 1000 of these bad boys in existence. And with prices starting at $1400, getting your hands on one ain’t cheap.

D.K… Donkey Kong! The Competition Edition of Donkey Kong Country is a rare find, indeed. This rendition of the exciting country platformer was distributed to Blockbuster Videos across the country for in-store tournaments.

After the promotional period ended, most in-store copies were destroyed or sold for pennies on the dollar. Remaining cartridges back at Nintendo HQ were listed in NP Magazine and quickly snapped up by a select few lucky individuals.

Come one, come all to the Nintendo Campus Challenge 1992. Test your skills in Super Mario World, Pilotwings, and F-Zero, and see if you have what it takes to be a video game master.

The Nintendo Campus Challenge toured roughly 60 colleges and metro areas in the year 1992. The idea was to spread awareness of Nintendo’s lineup of games and get fans excited for new releases. Many of the year’s most popular titles were loaded onto a bulky cartridge and sent out to official hosts across the country for a grand tournament. And wouldn’t you know it, the marketing ploy was a smashing success!

After the tournament, Nintendo instructed the NCC hosts to destroy their cartridges. But a few sneaky individuals managed to smuggle theirs home. How many remain? There are currently 3 known copies, and likely a few others buried among other lost treasures.

Consider yourself a video game pro? Try your luck in a triple-threat speed round of Mario Bros, Mario Kart, and Ken Griffey Jr. Baseball. The player with the most points wins!

Powerfest 1994 was Nintendo’s comeback tour. After losing traction to the Sega Genesis, Nintendo came back swinging with a showcase of the SNES’ latest and greatest titles – on one special cartridge.

Thirty-three of these cartridges were produced and sent to stores around the country for a massive tournament. Following the end of the tournament, they were destroyed. At least, that was the official story.

A few of these unique Nintendo Powerfest 1994 cartidges were saved from the compactor. Just how many? There are 2 known copies in existence, and both are in the private collections of wealthy gaming investors.

How much money are we talking? The last copy on the market sold on eBay for a whopping 23,000! And that, my friends, puts the Nintendo Powerfest 1994 cartridge at #1 on our list of the most expensive SNES games ever made.

Summary of the Most Expensive SNES Games

We’ve created this simple value chart recapping the most expensive SNES games and their respective values. For more info on each game, check out the section above.