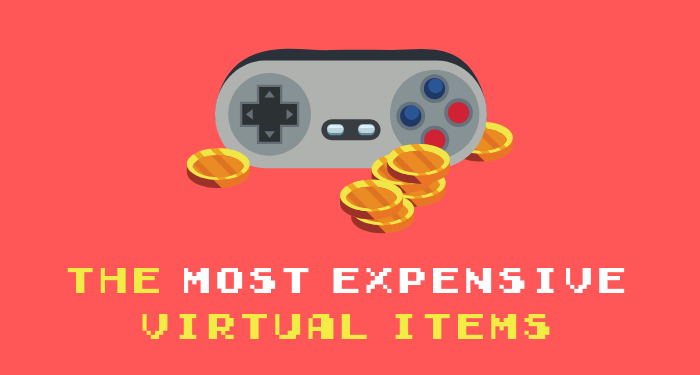 Gamers are notorious for spending big money on their favorite titles. But just wait ’til you hear about the most expensive virtual items in gaming history.

Whether it’s for an FPS like Counter-Strike, or an MMO like World of Warcraft, in-game items are a big part of competitive play. And just like real life, the best gear is a major status symbol of wealth and power.

Some gamers will empty their entire savings to go at it with the pros. Pretty crazy, right?

We’ve curated this article to give you a behind-the-scenes look at some of the most insane virtual purchases ever made. Intrigued? Let’s get started.

The 15 Most Expensive Virtual Items

Ready to check out the most expensive video game items ever sold? We’ll begin with a look at #15 and work our way down to #1.

Counter-Strike: Global Offensive is one of the most popular first-person shooters in the world. Developed by Valve Corporation and played by gamers across the globe, CS:GO dominates the online market. And so do its digital items.

In a world where your prestige and win/loss ratio are all that matters, having the best and coolest gear is a must. Enter the Karambit Crimson Web.

This item sold for $2,000 a few years ago, and similar variants still command high prices on the Steam Market. But if you want to stay competitive, it’s an investment you’ll need to make. And that puts it at #15 on our list of the most expensive virtual items.

The famous blue party hat. The one item that everyone knows about, but few people have ever seen. Catch a glimpse of one in-game, and you know right away that you’re dealing with a high roller. But how did a colorful paper hat come to be so important?

When RuneScape was first released, the development team at Jagex Games Studios would drop themed items on every major holiday. In December of 2001, this special item was the Christmas Cracker. The idea was simple: use the Christmas Cracker on a friend, and a Party Hat would pop out!

While there are several different color variants, blue Party Hats quickly became the most expensive video game item in all of RuneScape. Today, you’ll need to shell out at least $2,500 USD to get your hands on this elusive prize.

Eve Online is a space-based MMO that closely models the real world. To that end, it features an immersive crafting system, a bustling economy, and insane battling dynamics.

A big part of the battling system revolves around starships, which can cruise through space and attack other players. Several years ago, a long-time player managed to acquire the Revenant Super Carrier, a behemoth worth almost $9,000 USD. He thought he’d hit the jackpot.

For a while, it was the most expensive online game item in the industry. That is, until it was destroyed a short time later in one of the game’s most notorious battles. Umm, yeah. That one’s gotta sting.

Unless you’ve been living under a rock, you’ve heard of World of Warcraft. Launched in 2004 by Blizzard Entertainment, it’s one of the most popular MMORPGs ever created. So it wasn’t too surprising to see a high-levelled account named Zuezo go up for sale a few years back. What is surprising is the final sale price: a cool $9,500 smackers.

Both parties were happy with the sale, and the new account owner enjoyed his 15 minutes of fame. But it was short-lived. Word got around to Blizzard, and they permanently banned the account a short while later. Ouch!

Diablo 3 is infamous for its attempt at stopping illegal digital transactions by releasing its own auction house before third parties could step in. It was an excellent idea, in theory. And in the first several months, there were several high profile Diablo 3 item trades.

This includes the Echoing Fury Mace, which went for roughly $14,000. Yeah – 14 grand. This hot item was considered one of the best in-game weapons, and it provided a huge competitive boost for its new owner.

Unlike the past few in our list of the most expensive virtual goods, this one ends on a happier note. The transaction is part of Diablo 3’s legacy, and the Echoing Fury Mace is still regarded as the most expensive game item in the entire Diablo franchise.

Imagine paying $16,000 for a virtual sword from an MMO that hasn’t even been released. Sound insane? Well, not if you’re the gentleman who dropped that on a powerful sword from the martial arts-inspired game known as Age of Wushu.

Age of Wushu, which was released in 2012, takes place in Ming Dynasty China and uses weaponry modelled after the same era. During the initial beta period, an in-game sword was sold to the highest bidder to raise money for the official launch. Crazy, huh?

The $16,000 price tag makes the Age of Wushu Sword the most expensive game item sold in an MMORPG.

Ever wish you had your own private island? Well, virtual worlds can make all your dreams come true. Nowadays, you can own your own virtual real estate… for a bargain 26 grand.

At least, that’s what happened when Project Entropia hosted its first-ever virtual auction back in 2004. An Entropia enthusiast and virtual real estate developer dropped $26,500 on Treasure Island. Along with the sale came all the rights to the island, including the ability to tax other players real-world money for treasure hunting on the land

It was the first virtual auction of its kind, and it set the pace for the rest of the online industry. It also happens to be the 9th most expensive virtual item in gaming history!

The Dota franchise popularized the exciting battle arena genre. Even to this day, it remains at the forefront of the gaming industry, maintaining a massive base of players and fans.

Still, nobody expected a player to drop a whopping $38,000 on an in-game pet. But don’t be so quick to judge. It’s not just any pet. It’s the Ethereal Flames Pink War Dog. Just look at it in the picture above. Isn’t it so cute?

To the credit of the buyer, only 5 are known to exist. Still, it’s an insane amount of money, and it takes the #8 spot on our most expensive digital item list.

Everyone’s heard of Amsterdam, the Netherlands capital known for its dubious nightlife. After all, it’s a must-see destination for anyone visiting Europe.

But can you imagine liking it so much that you decide to buy it? That’s what the top bidder did when he dropped $50K on the virtual city from the popular life simulator Second Life. And no, that’s not a typo.

Much like the iconic real world destination, the virtual city is popular among players looking for *ahem* adult services. Fittingly, the buyer is from the Netherlands, and he plans to grow the city into a bustling hub for all types of players.

He’s also got a prized possession on his hands, one that ranks near the top of the most expensive virtual items in gaming history.

Yes – another Counter-Strike item. This time around, it’s a special skin that wraps around the exterior of your favorite in-game sniper rifle. But it’s cosmetic only and provides no in-game advantage. But wait – that’s not all.

This one-of-a-kind item features a fire-breathing dragon and was randomly gifted to a lucky player during a major eSports competition. It also bears the high-res logos from major CS:GO gaming teams, including Cloud 9, G2, and PGL.

Shortly after the competition, the skin was listed on a CS:GO auction site. The winning bid? An insane $61,000. Now that’s some dedication. The lucky fellow is now the proud owner of the world’s most expensive in-game item.

Dubbed The Nest Egg due to its origin and high price, this virtual embryo is the spawn of the all-powerful Atrox Queen. And it sold several years back for a mind boggling $70,000!

What’s it do, exactly? Up until recently, not a whole lot. But after 6 years of waiting around, it finally hatched!

Don’t be too quick to celebrate. Out of the shell popped an insidious beast named Feffox, whose sole mission was to destroy the famed planet Calypso.

Luckily, Entropia’s players banded together for an exciting event, and managed to take the evil demon down. Hooray! As for the owner of the prized spawn of the Atrox Queen? Well, let’s just hope this virtual investor didn’t put all his eggs in one basket

If you thought landing on the moon was an achievement, wait ‘til you hear about this!

As you know by now, Entropia is a virtual sci-fi world that takes place in galaxies far far away. And much like its real-world counterpart, the homeworld of this virtual adventure land has its very own moon.

Well, the moon is now under the ownership of an investor group that taxes other players real world money to mine resources on the space rock. And all it cost was a measly $150,000. A real bargain for one of the most expensive virtual items ever!

Number 3 on our list of the most expensive virtual items in gaming history is also from Entropia. This time around the item in question is none other than the famed Crystal Palace. What’s that, you ask? It’s a virtual space station that doubles as a major tourist hub in the online MMORPG.

The price? Over 300 grand! But that’s a small price to pay for Buzz “Erik” Lightyear, who’s recouping his investment by charging other players real money to visit his hunk of floating metal. Now that’s what we call a real steal.

Care to visit the famed space station? Go for it! Every $1 USD is worth 10 Project Entropia Dollars. Shell out enough moola and you can get in on the adventure too.

Jon Jacobs wasn’t just the face of Entropia. He was also the owner of the esteemed Club Neverdie, where gamers from across the galaxy would congregate for a rousing good time. And they’d pay big money to do so.

But after operating the nightclub for several years (and raking in roughly $200K annually), this entrepreneur was ready for a new adventure. So he listed his prized property at auction and waited to see how it would all play out.

The sale price? $635,000! Jon Jacobs made bank on the deal. And he’s got several new virtual projects in the pipeline, to boot.

The famed Planet Calypso, aka the homeworld of Entropia, was listed for sale a few years back – and you won’t believe the purchase price.

But first, some context. Entropia is known for its real world economy, where dollars can be exchanged for in-game currency. It’s a thriving MMORPG where folks who buy virtual real estate can earn cash money from renting out land or selling deeds to plots. And much like the real world, investors can rake in the moola if they play their cards right.

Although the planet eventually reverted back to MindArk’s control, this makes Planet Calypso from Entropia #1 on our list of the most expensive virtual items in gaming history.