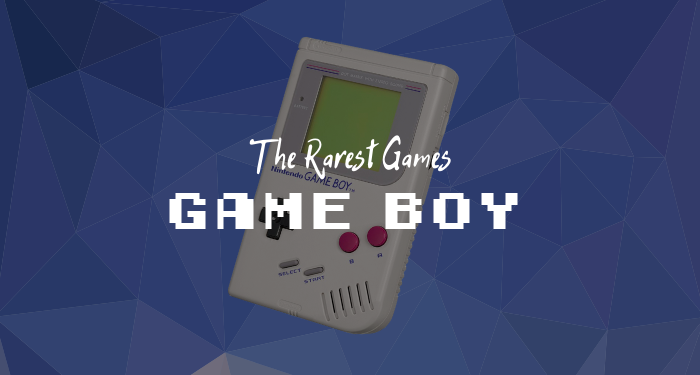 Before the Apple iPhone, there was the Nintendo Game Boy. It was a revolutionary idea. No longer were you confined to the house. The Game Boy let you take your entire gaming library everywhere you went! It was a portable entertainment center, full of impressive titles—many of which are now considered rare Game Boy games worth a small fortune.

Although the Game Boy was released decades ago (1989), the rare Game Boy games market is still heating up. In fact, there have been several high-profile sales in recent years, as prices continue to climb. That’s how much of an impact this tiny 8-bit device had.

This article explores the rarest and most valuable Game Boy games on the market. We’ll take a look at their estimated values as well as what made each one so special. Ready for some serious Nintendo nostalgia? Let’s dive in.

Working our way down from #10, let’s take a closer look at what makes each title so rare and valuable.

F1 Pole Position is a port of the original SNES game. But it’s not a port in the traditional sense. It uses the same title and artwork as the original but is built upon a different game (Nakajima Satoru F-1 Hero) and rebranded. Pretty neat, eh?

The objective of the game is simple. Players customize their racecar, then take to the track to compete against the game’s AI opponents for victory. F1 features 16 courses inspired by the actual tracks and locations from the 1992 Formula One Championship.

Although the game sold well in Europe, there were relatively few copies of F1 Pole Position released in the North American market. And this puts it at #10 on our list of rare Game Boy games.

As you might’ve guessed, Chikyuu Kaihou Gun ZAS is a Japanese import that’s become quite valuable in recent years.

The game is an excellent example of Japan’s shmup genre, which emphasizes storytelling and action-packed gameplay. The premise? It’s late in the 21st century, and a hostile force of aliens has invaded Earth. Hop in your starship and show them what you’re made of, as you collect powerups and shoot your way to victory.

The game is lauded for its beautiful parallax backgrounds, excellent use of color, and stunning attention to detail. It’s a real gem and widely considered one of the best and rarest Game Boy games around.

Toxie and his posse of superhero misfits return in the Game Boy rendition of Toxic Crusaders! Their mission? To fight pollution and save the environment before it’s too late.

Choose between iconic characters like Toxie, No-Zone, Major Disaster, Junkyard, and Headbanger. Then jump into the 2D platforming action. Your mission? To shoot down enemies & avoid obstacles, saving the planet one level at a time. Can you handle it?

Toxic Crusaders was ahead of its time. Not only that, it was only available for a limited while. Its scarcity and relevance place Toxic Crusaders right near the middle of our list, making it one of the most expensive Game Boy games around.

I vant to suck your blood! Are you a Castlevania freak with a craving for human flesh? If so, Kid Dracula is surely one of the best rare Game Boy games around.

Kid Dracula is a spinoff of the Castlevania series, and it features all your favorite monsters in pure platforming glory. The premise? Garamoth, the evil overlord, has returned–and it’s up to you to stop him. Team up with Death, master of… death, and send Garamoth back to the shadows from whence he came.

Its attractiveness among Nintendo buffs, combined with its scarcity, puts Kid Dracula at #7 on our list of the rarest Game Boy games.

Before tennis stars like Serena Williams, there was Jimmy Connors. And though he was well past his prime in 1993, he’d just staged one of the greatest sports comebacks in history.

This reignited the world’s passion for tennis, and Nintendo saw an opening. So they launched Jimmy Connors Tennis for Game Boy.

The idea behind the game? Players compete in the ATP Tour, vying for the gold cup and title of #1 tennis player. In their spare time, players could also compete against other tennis pros via a Game Link Cable.

Why has it become a rare Game Boy game? Tennis simply wasn’t all that popular in the USA. And though it saw decent distribution in Europe, very few copies ever reached the NA market. This makes it one of the most valuable Game Boy games around.

What makes Mega Man V so valuable? Well, it’s widely regarded as one of the best Mega Man games in existence. And it’s a portable iteration, to boot!

Capcom took their time developing Mega Man V, and it shows in the gameplay and story. The slippery Dr. Wily returns just months after his and Megaman’s epic fight in MMIV. But this time, Wily attacks Mega Man by proxy, using the robot Terra to do his dirty work for him. Mega Man is not amused.

Equipped with a new blaster, Mega Man embarks on a mission to save the earth and destroy Wily once and for all. Assume control of Mega Man and work your way, stage by stage, to Wily’s hideout. It’ll take all the firepower you’ve got if you hope to stand any chance in this action/platformer shooter.

Trip World is a remarkable Game Boy game. Now recognized as one of the best platformers on the portable console, it boasts stunning pixel art graphics, sweet chiptune melodies, and immersive gameplay. And… it was never released in North America.

We’ll get to why in a minute. But first, you should know what the game’s about.

The setting of the game is–you guessed it–Trip World. Players assume control of Yakopoo, a member of the Shabubu race. Their prized Maita “Peace” Flower has been stolen, and it’s up to you to retrieve it. Travel from stage to stage in search of the holy flower, using your bunnyhopping skills to take down every enemy that stands in your way.

Trip World is easy to learn, making it perfect for beginners. Unfortunately, the mild learning curve also led to mediocre ratings from experienced critics. This undoubtedly contributed to its limited release and current status as one of the rarest Game Boy games worth money around.

Just a few years ago, Sumo Fighter wasn’t on this list at all. Now, at the beginning of 2020, it’s right at #3 on our list of rare Game Boy games. What happened?!

A lot of it comes down to the scarcity of the cartridge combined with the game’s humor-filled gameplay. From the graphics to the audio, to the storyline, the entire title is a hodgepodge of silly antics!

What’s the game about? It’s a 2D sidescroller that follows Bontaro Heiseiyama as he journeys to Kyoto, Japan. What is Bontaro’s quest? To save the princess from the evil sorcerer and his minions. But if you hope to succeed, you’ll need to grow into a sumo master first.

Learn to use a bunch of hilarious new moves and abilities, then venture forth to knock out the baddies. Our favorite moves in your new arsenal? The face slap and pile driver, fitting finishers for any Japanese hero. Play through five areas on easy or hard mode, and show ‘em what you’re made of.

If you’re seeking the most valuable Game Boy games, Amazing Tater is a must-have for your collection.

The game’s premise? Guide your potato ally through a series of levels, overcoming puzzle-like obstacles along the way. Push crates, rotate objects, and fill pitfalls to reach the goal. Beat normal, action, and story mode, and you’ll have successfully taken the heat off your potato friend.

Much to developer Atlas’ chagrin, the Amazing Tater game didn’t sell very many copies in English-speaking regions. In fact, so few copies were sold that Amazing Tater rests comfortably at #2 on our list of rare Game Boy games.

Woah, woah, woah. Stop the presses. You’re telling me that the two rarest Game Boy games are both potato-themed? Why in the world?

The answer is simple: both Amazing Tater and Spud’s Adventure are part of the same ‘Puzzle Boy’ series. And similar to other games in the series, sales numbers for Spud’s Adventure were embarrassingly low. Needless to say, the game didn’t remain on store shelves for very long.

But what makes Spud’s Adventure especially unique is that it actually features well-rounded gameplay and graphics. Players assume control of Spud, the potato, as he ascends the Far Tower in search of the kidnapped princess. Along the way, he teams up with a motley crew of vegetable friends, gaining XP by completing puzzles, defeating enemies, and eventually taking down the boss.

It’s a shame the game never quite caught on. But that’s small potatoes when you consider how popular this rare Game Boy game is now. Recent sales data shows that it costs roughly $3,500 for new in box copies!

Summary of the 10 Rare Game Boy Games on Our List

For detailed info on each game, check out the section above.