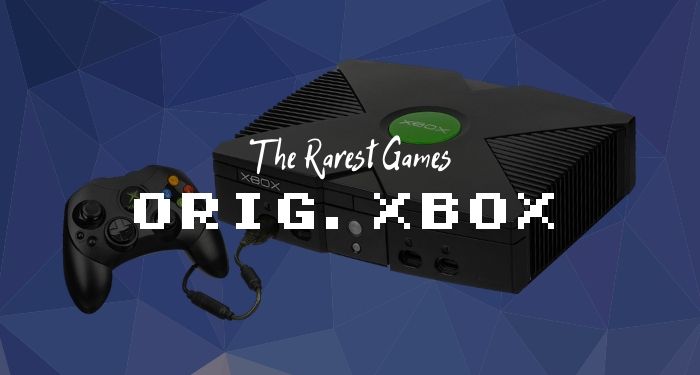 The Original Xbox is the iconic American console. It’s proof of how innovation (and a little luck) can pay off big time for companies willing to take a risk. And lucky for us retro gaming fans, the console continues to pay dividends – there are plenty of rare Xbox games to collect and play.

Microsoft entered a crowded playing field when the Xbox launched in 2001. At the time, the gaming industry was dominated by Sony and Nintendo, juggernauts with a firm grip on retail. But Microsoft’s bets paid off. The Xbox managed to break into the market, selling even more units than Nintendo’s GameCube. This is largely thanks to groundbreaking titles like Halo, Grand Theft Auto, Fable, and other rare Xbox games.

As gaming fans ourselves, we want to showcase some of these fantastic titles. So we’ve created this top 10 list of the most expensive Xbox games from way back in the day. Join us as we check out the hottest titles around.

Starting from #10, let’s work our way through the rarest and most expensive Xbox games.

If fighting games are your jam, Fight for NY is a classic.

This action-packed 3D masterpiece features a ton of popular rappers from the early 2000s, including Snoop Dogg, Ludacris, and Sean Paul.

The premise? Choose your fighting style and knock out the competition to the rhythm of the beat. Combo your moves and gain momentum, which you can use to activate your ultimate ability, aka Blazin’ Move. Play for fun or progress through story mode to unlock new content, including exclusive characters.

Why is Def Jam on our list of rare Xbox games? The game boasts addictive gameplay, innovative mechanics, and many of the most popular rap icons in history.

Halo Triple Pack is comprised of Halo: Combat Evolved, Halo 2, and Halo 2 Multiplayer Map Pack – all rolled up into one shiny disc.

This collection is notable because it includes all of the Halo titles released on the original Xbox. What is Halo, you ask? It’s an FPS developed by Bungie and released alongside the launch of the console. Blast your way through a scourge of aliens to unlock secrets about the planet Halo, or jump into multiplayer for some fast-paced competitive action.

The Halo series revolutionized the shooter genre and spawned an avalanche of hit titles, including the upcoming Halo: Infinite. As such, this all-in-one set is one of the rarest Xbox games worth money in 2020.

We’ve all heard of Mortal Kombat. But have you heard of Deception (Kollector’s Edition – Raiden) for the original Xbox?

This boxed set features several unique items, including a metal trading card, a disc detailing the history of the franchise, and a bonus arcade version of the game. From a collector’s perspective, that’s a lot of value. And that’s on top of the already innovative gameplay that Deception brought to the series. Seriously, the 3D Konquest and Puzzle Kombat modes are a must for serious MK fans.

All combined, these awesome features catapult Mortal Kombat: Deception (Kollector’s Edition – Raiden) to #8 on our list of the rarest Xbox games. It’s a real Fatality, if you know what I mean.

GTA 5 is one of the most popular games in the world as of 2020. But it wasn’t always the behemoth it is today.

Back in 1995, Grand Theft Auto was little more than a (tail)pipe dream. It was originally pitched as a simple 2D game called Race’n’Chase. That is, until the development team at Rockstar Games realized the title’s potential and shifted strategies. The revamped version upped the ante with more complex artwork and a name change: enter Grand Theft Auto.

The results were spectacular! It sold millions of copies, and Rockstar quickly began development on new titles for the series, including Grand Theft Auto III, Vice City, and San Andreas, aka “The Trilogy.”

Naturally, this all-in-one set that combined every GTA title released on the Xbox was a huge hit. Today, it remains a serious collectible for original Xbox fans and one of the most valuable Xbox games on the market.

Marvel vs. Capcom 2 is one of the best Xbox games ever created. Seriously – where else can you swing into the action as Spiderman from Marvel as your opponent jumps in as Mega Man from Capcom? Absolutely nowhere! Battle it out in a winner-takes-all matchup, and find out which side truly reigns supreme: Marvel or Capcom.

What makes Marvel vs. Capcom 2 so valuable? First off, the game is one helluva good time. There’s nothing better than smashing the daylights out of your best friends, especially when you can choose from over 50 unique characters.

Second, it’s the first game in the Marvel vs. Capcom series to boast 2.5D graphics – a serious feat for the time, and real eye candy for players.

And then there’s the meteoric rise of the MCU, or Marvel Cinematic Universe. Everything it touches turns to gold, and video games are no exception. Over the past decade or so, the game has continued to rise in value, earning it the #6 spot on our list of rare Xbox games.

Oh no! The Teen Titans are trapped in a video game, and all their past foes are back with a vengeance. The solution? You already know what it is. Teen Titans, GO!

Pick your character – Beast Boy, Cyborg, Raven, Robin, or Starfire – and fight your way through Story Mode as you take down waves of supervillains. Or, give it your all in Battle Mode, as you and your pals face off to find out who the real superhero is.

Teen Titans holds a special place in many Millenial and Gen Z hearts, and the game remains a prized treasure in many retro Xbox collections. If you want to get your hands on a mint copy, expect to shell out a whopping $175 or more.

I challenge you to a Xiaolin Showdown!

Remember the anime from way back in the day? If you’d asked any kid in the early-mid 2000s what a Xiaolin Showdown was, they’d eagerly explain to you the rules of battle. It’s simple: each contestant chooses a magic item, aka a Shen Gong Wu, and battles it out in a last-man-standing contest. The catch? There are all different types of Shen Gong Wu, and each one grants a special power for use during the fight.

The Xbox version of the game features these same rules and delivers an exciting romp with your favorite characters from the show. But what makes the game so valuable today? Well, the European variant of Xiaolin Showdown is among the last games ever released for the Xbox in Europe. Combined with its nostalgic value, the game is one of the rarest Xbox titles around, particularly in the USA.

Remember Futurama? The silly sci-fi show from Cartoon Network? Well, the video game by the same name boasts the same premise. It’s all about the 4-person squad – Bender, Fry, Leela, and Zoldberg – zigzagging across the Galaxy and getting into mischief.

Play as each of the main characters as you progress through the 3D platformer levels. Each level boasts varying mechanics depending on the primary character navigating each stage. The main commonality throughout the entire game? You’ll need to shoot, blast, and fight your way to victory, overcoming bloodthirsty aliens and cunning creatures along the way.

Though the game received mixed reviews, Futurama was a cultural mainstay of the early 2000s. As such, boxed versions of the game will set you back over $150 bucks!

Metal Wolf Chaos is one of the few Japanese exclusives for the Xbox. The reason? The Xbox wasn’t very popular in the region, with console sales totaling an abysmal 500,000 units. The demand just wasn’t there.

To increase the Xbox’s prevalence in the market, Microsoft and FromSoftware worked together to develop Metal Wolf Solid. The premise? It’s late in the 21st century and the US is on the brink of collapse. A coup is underway, and America is about to fall under military rule. That is, until the President of the United States, Michael Wilson, jumps in his armored mech and begins to fight back.

Assume control of President Wilson as you wrestle control back from the would-be usurpers. Using a variety of weapons – ranging from standard handguns to missiles – rain freedom down upon the infidels as you restore peace to ‘Merica.

The game wasn’t much of a success in Japan (who woulda guessed?). But it did gain a cult following back in the States, largely thanks to the humorous gameplay and exaggerated patriotic themes. Nowadays? You can play a remastered version on the Xbox One or PS4, or scope out a used copy for up to 280 Benjamins.

First, very few copies of Steel Battalion were produced. Microsoft and Capcom had never released a game quite like Steel Battalion, and they weren’t sure the market was ready for such an innovative title.

Second, SB requires the use of a special controller (dubbed the Mega-Jockey-9000) that’s about as big as a small table. This controller features over 25 buttons, multiple joysticks & throttles, and 3 foot pedals. Talk about a doozy!

Third, the game is pure brilliance. Arm yourself with the MJ9000, mech up in your vertical tank, and see if you’ve got what it takes to wipe out waves of enemy forces.

Sounds pretty cool, doesn’t it? If you stumble across a copy, it’s worth a test drive. The only problem? It’ll set you back a whopping $500! That makes it the most expensive Xbox game around, and a must-have for serious collectors.