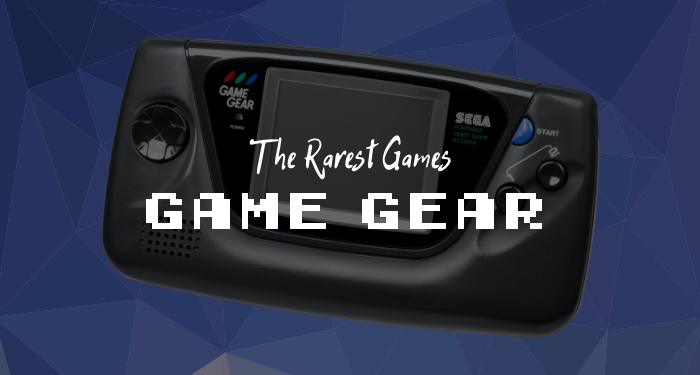 The Sega Game Gear is a popular handheld console from the 90s. Although it didn’t attract as much attention as the Game Boy from Nintendo, millions of gamers enjoyed this retro console’s many hit titles. As you might expect, the rarest game gear games are a serious point of interest for old-school gamers attracted to such titles.

In this article, we’ll be checking out the top 10 most expensive Game Gear games from the North American region. So, without any further ado, let’s delve right into the details!

We’ll start at #10 on this list of rare Game Gear games and work our way down to the most valuable title.

This 1986 arcade title features two characters known as Bub and Bob. Their objective? To save their girlfriends from the insidious Cave of Monsters! The game levels progress as this dynamic duo traps enemy characters inside bubbles — and then bursts them! Players can also jump over these bubbles to get additional points.

Each stage is cleared when all bubbles have been destroyed. After which, the players are presented with their top scores. The game is available for $39, making it one of the most valuable Sega game gear games on the market.

The next game on this list of rarest Game Gear games is Tempo Jr., which has a price tag of $42. The game was made available to players in 1995, and the overall punchy colors of the user interface made it one of the best games available at the time. The title is still an excellent option for players looking for a nostalgic vibe with a game that doesn’t bore them.

Players control the in-game character known as Tempo. Fighting alongside his friend Katy, Tempo must scale a skyscraper to reach and defeat King Dirge once and for all.

Pay close attention to the meter on the left side of the screen, which inches upwards as you defeat enemies and climb the tower. You’ll need to conserve your strength for the battle to come!

8. Shining Force: The Sword of Hajya

Shining Force: The Sword of Hajya was released in 1993 and serves as a successor to Shining Force Gaiden.

The premise? Players must seek out the Sword of Hajya, a powerful artifact that’s been stolen by Iom. Participate in grueling turn-based battles as you move through levels and inch closer to the critical prize. Along the way, you’ll encounter various cutscenes that explain the stakes and guide you through the storyline.

Shining Force: The Sword of Hajya features classic TRPG mechanics and executes them to masterful effect. This title currently goes for roughly $42, meaning that, despite its inclusion on this list of rarest Sega Game Gear games, interested parties can get their hands on it with ease.

Released in 1993, Cosmic Spacehead offered a one-of-a-kind experience to players. The game’s lead character, Linus, is tasked with photographing life on Earth to prove the existence of the legendary planet and its inhabitants.

A wide array of exciting items makes the experience fun-filled and enthralling. The highly immersive mini puzzles of the game are a major highlight of the title, which is adored by players worldwide.

Gamers can get their hands on this hit game for $43, making it one of the most accessible rare Game Gear games.

6. The Fantastic Adventures of Dizzy

The Fantastic Adventures Of Dizzy (known as Fantastic Dizzy in Australia and PAL regions) was released in 1991. The title features all 16 characters of the Dizzy series, making it an ideal choice for players interested in learning more about the franchise.

The game’s storyline presents a unique setting in which Daisy, Dizzy’s girlfriend, is kidnapped from Yolkfolk by the evil wizard named Zaks. The game proceeds when Dizzy invades Zaks’ castle in the clouds to rescue his girlfriend.

Fantastic Dizzy offers a strange take on the adventure genre, as you can’t battle or defeat enemies. Instead, you’ll spend your time completing mini-games, collecting stars, and solving a number of eclectic puzzles.

Despite its strange mechanics (perhaps even because of them), Fantastic Dizzy was awarded the NES Adventure Game of The Year Award 1991 by Game Players Magazine. If you’re looking for one of the most entertaining and rarest Game Gear games, you can grab this title for $46.

The game features a storyline in which an evil group of villains creates a television broadcasting company to brainwash the general public. But things go south when a vigilante sets out to present proof of the company’s evil plots to the public. Assume control of Guy Freelander, the vigilante in question, and see if you have what it takes to expose the truth… before it’s too late.

With a price tag of $44, Arena Maze Of Death is an excellent option for players interested in the most valuable Sega Game Gear games.

Developed exclusively for the Game Gear, Tails Adventure was released in 1995 and features the ever-iconic Tails from the Sonic The Hedgehog series.

Assume control of Tails as he explores Tails Island and hunts down the Kukku Army, using 26 different items spread across the various stages to attack and eliminate all enemies that get in his way. Also, be on the lookout for rings scattered throughout the levels, as well as Chaos Emeralds that can extend Tail’s flight duration.

The game has a relatively slower pace than Sonic The Hedgehog, as the character can only walk and fly. That said, it’s still an enchanting game to explore and provides a detailed look at Tail’s life before he met up with Sonic.

You can find Tails Adventure for roughly $70 nowadays, making it one of the rarest Sega Game Gear games.

CJ Elephant Fugitive was released in the US in 1994 as a remake of 1991’s CJ’s Elephant Antics. The game presents a lovable blue-colored elephant who shoots peanuts at enemies as he avoids and dodges obstacles across levels.

But be warned. Each time the elephant dies, you have to restart the game from scratch. This, in turn, makes CJ Elephant Fugitive a captivating yet competitive experience you’re sure to enjoy.

With a price tag of around $140, CJ Elephant Fugitive earns itself a top spot on our list of most expensive Sega Game Gear games.

Mega Man is a single-player action and adventure game released in 1995.

No, it’s not the original Mega Man, despite its deceptive title. This version carries forward the bosses and stages from Mega Man 4 and 5, while throwing in a few unique twists.

In this version, the game’s main character — Mega Man — must fight against a mad scientist known as Dr. Wily. But that’s easier said than done, as Dr. Wily possesses six powerful Robot Masters that attack Mega Man at every turn!

To defeat Dr. Wiley, players must take control of Mega Man and move, jump, and shoot enemies across various stages. Unlike previous versions of the game, the 1995 version of the game did not offer players the option to continue playing when they ran out of lives. This makes the game even more engaging, as it requires players to be very attentive.

With a current price tag of roughly $150, players will have to shell out a fair bit of cash to get their hands on this blast from the past. It’s truly one of the most valuable Game Gear games around.

Pete Sampras Tennis was launched in 1994 and offered players an interactive tennis-playing experience — all in the palms of their hands!

With four different modes, including Challenge, Tournament, World Tour, and Tutorial, players could pick their favorite tennis expeditions and enjoy anywhere between one and five sets per round. The game also featured multiplayer mode, which let users compete against their friends! Pete Sampras Tennis was the ultimate romp for all would-be tennis stars.

With a price tag of over $150, Pete Sampras Tennis is the number one title on our list of rarest Game Gear games!