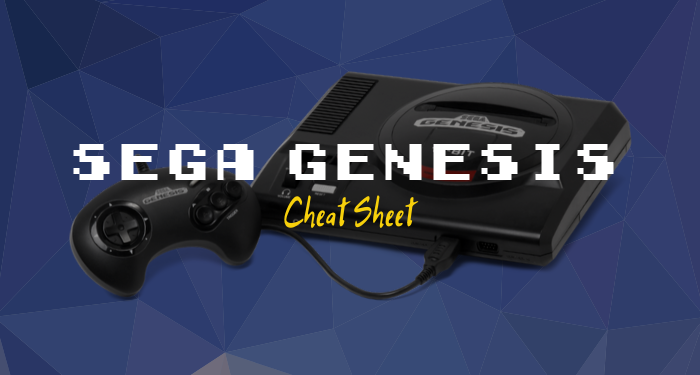 Remember the good ‘ol Sega Genesis? Although Sega had already made some waves with the Master System, it wasn’t until the Genesis released in 1988 that the console maker really blew up.

Known as the Mega Drive outside American markets, the Genesis is a 16-bit console that saw spectacular success all around the world. This is largely thanks to its cutting-edge architecture and exceptional library of games. But it also stems from an impeccable design complemented by perfect timing and brilliant marketing.

Here’s a quick overview of the Sega Genesis console:

The Sega Genesis sports a solid black chassis with pops of white for branding and readability. This sleek design was marketed towards youth and young adult crowds just entering the gaming market and/or seeking a new platform.

Did the design work? Well, yes. But it took more than a cool new box to woo gamers away from Nintendo.

Enter the Genesis controller. The Genesis controller was similar to the Master System’s, with a few key differences. First, there were three primary action buttons instead of two. And second, the singular START button felt simpler and more convenient. The controller also featured a curved design than matched the cool feel of the console itself.

Later in its lifecycle, Sega would introduce the 6-button controller. This boasted a similar design, but it squeezed in an additional 3, smaller action buttons. The new configuration was a hit among fans and critics alike.

In terms of hardware, the Genesis was at the forefront of the fourth generation of consoles. It achieved this by building upon the Master System and using several of the same internal elements, including many of the components used to render sound.

This allowed Sega to enter the market before Nintendo and grab a larger slice of the 16-bit sector. And boy, did their strategy work.

Interest in the Sega Genesis led to a flurry of accessories and additional peripherals. These ranged from the Sega Modem, which allowed for online competitive play, to the Sega CD, which upgraded the capabilities of the system even further.

All in all, the Sega Genesis was an incubator for cutting-edge gaming back in the day.

Sonic the Hedgehog. Mortal Kombat. A slew of sports titles. These games all contributed to the massive success of Genesis. They also spawned a legion of fans, as well as countless spinoffs and adaptations.

How many of these top ten most popular titles did you play?

Despite the success of the SNES (which would go on to sell nearly 50 million units), the Sega Genesis is seen as a critical player in the console wars of the ’90s. It retained a huge following that allowed Sega to go on producing consoles for another decade.

And remember when the internet blew up over Sonic’s design in the Sonic the Hedgehog movie? Yeah – that’s the power of nostalgia.

Somehow or another, Sega managed to break through Nintendo’s video game monopoly and develop a console worthy of this list. But while Sega was selling millions, Nintendo was working on an entirely new way to play.