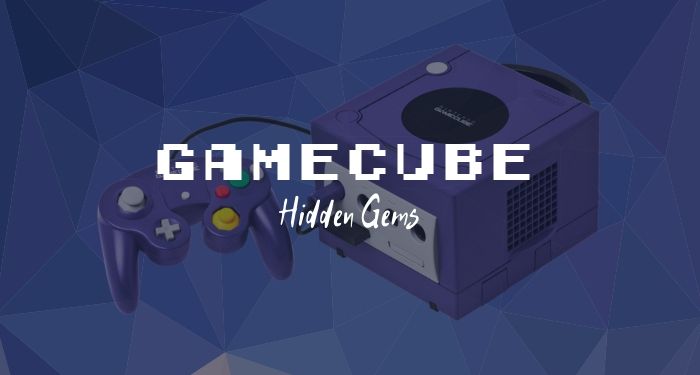 The GameCube lost the 6th gen console war. That’s because it was released around the same time that the Playstation 2 began dominating the market. This meant sluggish sales for the system, as well as a ton of underrated GameCube games and hidden gems.

While this was a bummer for Nintendo, it also meant going back to their roots and revitalizing their relationship with developers. The result? Over 650 titles for the GameCube, with many of them being high-quality first and second party releases.

This article takes you through 10 of those releases, all of which are now recognized as among the best underrated GameCube games or GameCube hidden gems.

Ready to go? Let’s get started.

Working our way down from #10, let’s check out the top underrated GameCube games and hidden gems.

Chibi-Robo! is a platform & adventure game that has players assume the role of a tiny 10cm-tall home assistant robot. Your objective? To complete various tasks around the house, collecting Happy Points along the way.

The game features a charming storyline and complex characters, and it was praised for turning mundane tasks into rewarding gameplay mechanics. Unfortunately, the favorable reviews did not translate to high sales numbers.

Released at the end of the GameCube’s lifecycle, Chibi-Robo!’s North American sales were estimated well under 250K. And though a Wii port was released, it fared even worse than the original edition.

Chibi-Robo! is a mesmeric title and a true underrated GameCube game. If you can find a copy, it’s well worth giving it a play.

9. Billy Hatcher and the Giant Egg

Published by Sega and released for Gamecube in September of 2003, Billy Hatcher and the Giant Egg is one of the best GameCube hidden gems for several reasons.

For one, the game features an endearing plot that takes place in Morning Land, a fantasy world full of animals. But all is not well is this once-peaceful world. The Crows have infiltrated Morning Land with one goal: to bring all its creatures into servitude.

Assume control of little Billy Hatcher as he’s transported to Morning Land on a quest to save the Chicken Elders and stop the Crows’ evil plan. Your main weapon on this quest? Giant eggs that can be used to roll around the map and squash bad guys. How cool is that?!

Despite its favorable ratings, Billy Hatcher and the Giant Egg was a bomb, selling under 250,000 copies worldwide. That makes it one of the best underrated GameCube games and a top hidden gem on the platform.

Skies of Arcadia was originally a Sega exclusive. That is, until Sega pulled out of the console wars and began releasing titles for other systems. Skies of Arcadia was ported over to the GameCube in 2003, but it never achieved the success it deserved.

What’s it all about? Well, Skies of Arcadia follows the story of Vyse, an air pirate who embarks on a voyage to save the planet from the evil Valuan Empire.

Set sail across the open air as you explore the game’s in-depth world and heartfelt storyline. You’ll get to know over a dozen NPCs along the way, and you can develop these relationships to enlist help on your journey. Trust me – you’ll need it if you hope to come out of the game’s turn-based RPG encounters in one piece!

Star Fox and the gang are back in this action-adventure title developed by Rare and published by Nintendo. But this is no typical Star Fox adventure. Instead of the thrilling space-age combat and aerial maneuvering you’re used to, this iteration features mechanics much more akin to The Legend of Zelda.

Navigate the world’s 13 different zones in third-person perspective, as you embark on a quest to take down Andross. Using your unique multi-purpose staff to explore, attack, and solve puzzles, you’re well equipped to defeat any enemy that stands in your way.

Originally slated for a N64 release, Star Fox Adventures was delayed and reworked to launch alongside the Nintendo GameCube. But once it was released, the game received mixed reviews by fans and critics for being more like an RPG than a typical Star Fox title.

And though Star Fox Adventures sold relatively well, it’s still knocked by purists for straying too far from the norm. This puts it at #7 on our list of the most underrated GameCube games from the early 2000’s.

You may know the Fire Emblem characters from games like Super Smash Bros. But did you know that they’re part of a classic, if not underrated, video game series? Introducing Fire Emblem: Path of Radiance.

Fire Emblem: Path of Radiance is an RPG developed by Intelligent Systems and published by Nintendo. The premise?

Path of Radiance takes place on the content of Tellius. The Beorc nation of Daein has invaded Crimea in a deadly assault on freedom. All hope seems lost and the world needs a hero.

Take control of Ike and friends as they ally with countries in the region to restore independence and bring peace back to the land. Using your *ahem* unique skill set as a mercenary, engage in turn-based tactical combat against enemy invaders. Think you’re up for the challenge?

The game features thrilling mechanics and a riveting storyline that’s reminiscent of real-world tensions. And though it was praised for its compelling gameplay and immersive plot, Fire Emblem’s sales weren’t quite up to snuff. Nowadays, it’s one of the rarest GameCube games, and a true hidden gem.

In Baten Kaitos, players take on the role of a guardian spirit who’s tasked with guiding Kalas on his adventure across a floating kingdom in the sky. What’s the mission? To avenge Kalas’ fallen family and restore peace to the island nation after a series of malevolent events.

Baten Kaitos is a turn-based title that plays like a typical RPG, with levels and experience points gained for defeating enemies in battle. The twist? Baten’s combat system revolves around magical cards called Magnus, aka rune-like artifacts that hold the essence of objects, which are put into decks and used for healing, buffing, attacking, and more.

Baten Kaitos is unique thanks to its mix of traditional turn-based combat and early CCG dueling system. It boasts an incredible storyline and provides hours of action-packed gameplay.

But despite glowing reviews, the game didn’t sell very well, with estimates ranging from 200 – 300,000 copies worldwide. And that puts it at #4 on our list of the best GameCube hidden gems.

If you’re a fan of the traditional shoot ‘em up genre, Ikaruga is an incredible hidden gem for the Nintendo GameCube.

Developed by Sega, Ikaruga is a vertical shooter with five unique stages and multiple difficulty levels. The objective? Pilot the Ikaruga fighter as you avoid obstacles and fire missiles at enemy craft. Chain your attacks to gain extra points and attempt to land yourself at the top of the leaderboard.

Although Ikaruga’s reception was mixed and the sales lackluster, the game maintains a cult following of dedicated fans to this day. That’s largely because Ikaruga features incredibly fluid gameplay and does justice to the classic shoot ‘em up genre while delivering a few innovative twists.

Welcome to The Holosseum, aka the Battle Arena, where you can pit your robot against a series of opposing mechs. But before you begin, you’ll need to customize your robot by choosing parts from the following 5 areas: chassis, legs, backpack, weapon, and bomb. Once you’re happy with the build, unleash your robot into the Arena and show the world what you’re made of!

Your goal within the Arena? To defeat enemy robots and collect their parts. With enough strategy and a little luck, you will eventually amass a huge arsenal of components. Doing so will allow you to customize ever more powerful mechs, until you’re the reigning world champion!

Over the years, Custom Robo has gone from dud, to being recognized as one of the best GameCube games ever made. How’s that for an underrated hidden gem?

Full disclosure: Kirby Air Ride is one of my favorite games of all time, and I spent hundreds of hours playing it in my youth. But… it’s also one of the most underrated games in the entire GameCube lineup.

The primary focus of the game is City Trial mode. Here, players race against the clock to find a star vehicle and collect power ups before the timer hits zero. Once it does, you leave the city behind and enter a new challenge. The type of challenge is a mystery, and it ranges from traditional racing to last-player-standing arena mode. The winner of this challenge takes the victory and gains major bragging rights.

In addition to City Trials, Kirby Air Ride also features a fantastic open-world mode that lets you ride around a sandbox map full of secret locations and endless possibilities.

For some reason or another, the game received a rating of just 60/100 from critics. But take it from me and the countless other kids who spent hours upon hours playing their hearts out – Kirby Air Ride is one of the best GameCube games ever released.

If you enjoy psychological horror games and want a break from the Resident Evil series, Eternal Darkness: Sanity’s Requiem is your ticket to the fright-fest.

Play as one of the game’s many characters, and fight for your life against a powerful entity hellbent on enslaving the living. Battle monsters, complete puzzles, and pay close attention to your sanity meter. Too much terror, and it’s game over.

Eternal Darkness features an immersive plotline, innovative mechanics, and lots of hidden secrets. Though it was originally planned for the N64, it received a full overhaul before launching alongside the GameCube to universal acclaim.

But like many other titles on our list of underrated GameCube games, Eternal Darkness didn’t fare so well financially. Fewer than half a million copies were sold in America, while a dismal 15,000 were sold in Japan.

And that puts it right at #1 on our list of underrated GameCube games & hidden gems.